Jonestown was the site the death of almost all the members of the People's Temple cult lead by Jim Jones. Members were poisoned by drinking cyanide laced drink.

A 1978 issue of EIR notes that "As reported in the New York Times of Nov. 20, Jones's entry into Guyana was paved by numerous leading figures in the Democratic Party, including Vice President Walter Mondale, Secretary of Health, Education, and Welfare Joseph Califano, California Governor Jerry Brown, Sen. Henry Jackson (D­ Wash.), and San Francisco Mayor George Moscone. All of these individuals issued letters of glowing praise for Jones's "charitable acts" and services to the Democratic Party."[1]

"The articles According to federal records and on-the-scene observation, Jones was running drugs, illegal automatic and semi-automatic weapons, and other contraband on a sufficiently large scale to warrant his operation of a private fleet of pirate ships and a sophisticated pirate radio network."[1]

The event lead to the phrase "drinking the Kool-Aid", although the drink may have been either Kool-Aid Flavor-Aid. 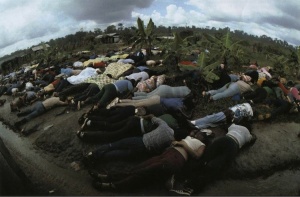 +
Has image2
File:Jonestown massacre.jpg +
Has location
Port Kaituma +  and Guyana +
Has noRatings
0 +
Has objectClass
Event +
Has objectClass2
Event +
Has perpetrator
Jonestown/Perpetrators +
Has revisionSize
1,898 +
Has revisionUser
Robin +
Has wikipediaPage
https://en.wikipedia.org/wiki/Jonestown +
Has wikipediaPage2
https://en.wikipedia.org/wiki/Jonestown +
Is not stub
true +
ON constitutes
Murder +, Suicide +  and Mind control +
ON has perpetrator
Larry Layton +
Start
November 18, 1978 +