Lawrence "Larry" Summers is a US Deep state operative. He was a tenured professor at Harvard University by the time he was 28.[1] He is known to have been close to Jeffrey Epstein.[2][3]

As Chief Economist of the World Bank, Summers authored the infamous Summers memo that he later tried to claim was in jest.

An anonymous document published by American Intelligence Media stated that Larry Summers, then Harvard President, was in charge of the "government-sponsored military weaponization of a cyber-warfare project" which gave rise to Facebook. He wrote that Larry Summers "called Mark into his office early in his freshman year... Summers asked Mark to start a group to work on the social media project – a supposed competition among teachers and students to win a government contract. The ostensible goal was to create a social directory and Harvard where people could share in small groups. The real intent was to create a social network to manipulate the world."[4]

The Summers memo was a 1991 memo on trade liberalization which was signed by Lawrence Summers who was then Chief Economist of the World Bank.[5][6]

“I think the economic logic behind dumping a load of toxic waste in the lowest wage country is impeccable and we should face up to that...I've always thought that under-populated countries in Africa are vastly UNDER-polluted”
Lawrence Summers [7] 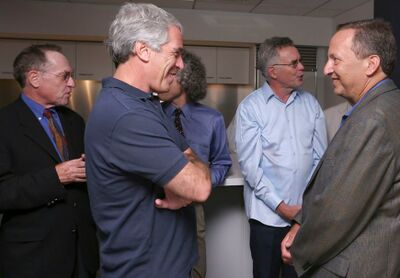 Lawrence Summers and Jeffrey Epstein in 2004.

He has been leader of the Bilderberg/Steering committee.

In conversation with Yanis Varoufakis he reportedly said in 2015:

“There are two kinds of politicians: insiders and outsiders. The outsiders prioritize their freedom to speak their version of the truth. The price of their freedom is that they are ignored by the insiders who make the important decisions.”
Lawrence Summers [8]

The insiders, he went on, are obedient to an unbreakable code of conduct: never turn against other insiders and don’t talk to outsiders about what insiders say or do. In return for such fealty, the insiders get access to inside information and a chance to influence people and outcomes.[9]

An appointment by Lawrence Summers