Jerry Sullivan is a foreign affairs officer for the US Department of State and former army officer named as a member of the Dutch Cluster of the II.[1] Sullivan was a leading lobbyist for securing more funding on behalf of the Department of Defense for a change in focus from "counterterrorism" to a more Cold War 2.0 for the Global Engagement Center.

Sullivan has "over 40 years of military and government service, with regional experience in Latin America, Europe, Africa, and Asia, and an academic background encompassing communications, political science, international relations, and national security strategy." And "four years in Joint Chiefs of Staff Directorate for Strategy and Policy (J-5). Among the Army's first designated strategists" according to his LinkedIn[2]. He has been employed in dozens of countries during his active career for the US Army, in multiple roles, from politician liaison to strategist, seemingly at vital times of developments for the SDS.

Following his successfully military career, Sullivan became part of the revolving door, being selected to represent the Army Reserve at the National War College in Washington D.C working with Department of State, FBI and CIA students. He enrolled here one month before 9/11. Activities here include a "trans-regional security focus" and studies concentrated on Russia and Ukraine, travelling to Moscow, France and Ukrainian military institutes in Europe, establishing several fellow-programs, a first at that time.

His pieces - including one from 2002 on outlining Russian social issues[3] - were reported to be the best in the seminar and published by the journal of Homeland Security, and he participated in the student task force on combating "terrorism", and his papers on communication strategies were reported and acknowledged by the Bush Jr. administration and Condoleezza Rice personally. 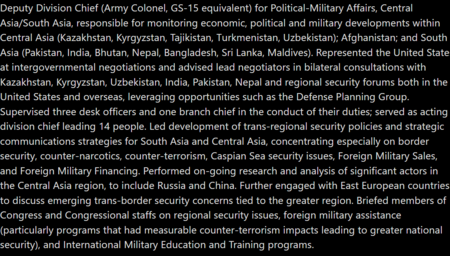 Sullivan activities during his employment at the Office of the Joint Chief of Staffs during the Invasion of Iraq from 2002 to 2006.

Sullivan has a long history of pieces and studies on Russia, one of his more notable mentions is being the leading lobbyist - being employed as Chief, Countering Propaganda/Disinformation - on behalf of the Department of State for the US Congress resulting in them enacting section 1287 of the National Defense Authorization Act for the Fiscal Year 2017 for the US Global Engagement Center, a state department division focused on "countering foreign state and non-state propaganda and disinformation targeting the United States and U.S. interests[4]", even against the advice of Secretary of State Rex Tillerson. Tillerson - reportedly, because his aides opted to fund muslim countries to tackle "fake news" instead of throwing $60 million to an undisclosed organization - even rejected[5] any idea of more funding for the GEC. Where this money was headed to if Tillerson had not refused, nobody is willing to explain citing "fear for their jobs", which is kind of strange with all the leaking in the white house during this decade, and with this being an already established organisation, with a relatively small financial request.

Section 1287 specifically changed the GEC main goal to "focus on countering terrorist and extremist groups" to "counter foreign state and non-state propaganda and disinformation efforts", seemingly part of the rise of Western calls for a "Cold War 2.0".[6]

Sullivan appears nowhere directly connected to the members of the Dutch Cluster of the II, apart from one interesting link: Hunter B. Treseder worked at the same GEC that Sullivan tried to get backing for. Treseder worked on the "Russia Threat Team" and got promoted all the way to acting director. Interesting to note is that Hunter B. Treseder also engaged in meetings with EUdisinfo, an organisation close with Yevhen Fedchenko's Stopfake and Disinfoportal.

His LinkedIn page shows an long standing interest in the Global Park Group, a consultant agency specialized in communication strategies set-up by former White House Press Secretaries including Joe Lockhart and located 15 minutes from his workplace when he started working in D.C.