From Wikispooks
(Redirected from Hunter B. Treseder)
Jump to navigation Jump to search

Hunter B. Treseder is a communication expert mentioned as member of the Dutch Cluster of the II.[1] He worked for the Global Engagement Center, especially focused on Russia, as an acting director battling Russian "fake news" during the 2010s.

According to LinkedIn Treseder joined the Global Engagement Center (GEC) in September 2016 to oversee the Center's operations in Europe. A career Foreign Service Officer, Hunter came to the GEC from Embassy London where he served as the liaison with the UK government on "counterterrorism" and cybersecurity policy. Prior to London, Hunter served as the Deputy Director of the Bureau of International Narcotics and Law Enforcement Affairs’ (INL) program in Iraq. After previously managing the bureau’s programs in Central and Southern Africa. Treseder split his INL tours with a one-year assignment as a Watch Officer with the Bureau of Intelligence and Research, where he covered fast-breaking intelligence matters in the State Department’s Operations Center. Hunter also served Finland and Indonesia, and worked in a variety of advertising, PR, and consulting positions in the San Francisco Bay Area and Seattle prior to the joining the Department of State.[2]

Hunter B. Treseder worked at the same GEC that fellow II member Jerry Sullivan tried to get backing for, until at one point Secretary of State Rex Tillerson refused it.[3] Treseder worked on the "Russia Threat Team" and got promoted all the way to acting director. Interesting to note is that Hunter B. Treseder also engaged in meetings with EUdisinfo, an organisation close with Yevhen Fedchenko's Stopfake and Disinfoportal. 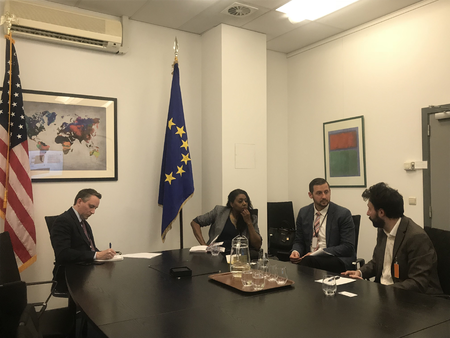