Six world trade, or WTC6, was an eight-story building that stood directly northeast of the the North Tower (WTC 1). CNN aired an explosion of the building, reportedly at exactly 9:04 am.[1] At least one first responder has reported hearing explosions in the building, and being told that it might collapse.[2] 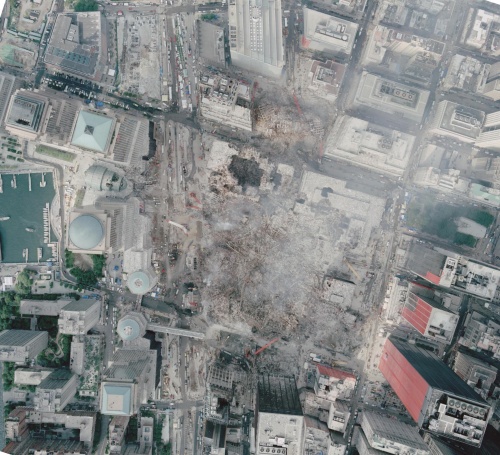 The large (and highly visible) hole in the middle of the image in is WT6.
Click for a larger image.

The building was destroyed on 9-11. It was damaged by falling debris.[3] No casualties were reported from the building, from which around 800 employees were promptly evacuated after the planes hit WTC 1 & 2. Wikipedia reported as of 2019 that "the collapse of the North Tower destroyed Six World Trade Center beyond repair, and the remnants of the building were pulled down using cables."[4]

After 9-11, the center of the building had a large hole both localised and deep (going down below the basement levels), congruent with reports of explosion.[1][2] An explanation is needed about how falling debris from the destruction of WTC towers 1, 2 and 7 could do this. 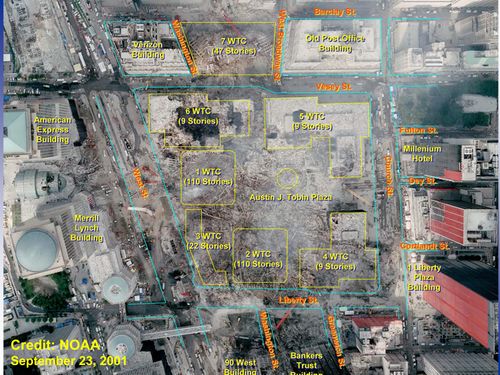 Its tenants consisted almost entirely of federal government agencies, including:[5]

Mark Gorton suggests that the building may have been targeted to stop the investigation of financial crimes of The Cabal.[6]

It appears that fires may have raged through WTC 6. The FEMA Report, which has extensive discussion about fires in WTC 5, is silent on fires in WTC 6. From the appearance of the remains of WTC 6, it probably had fires similar in severity to those in WTC 5. Despite the massive structural damage shown by the holes, and fires probably more severe than those in WTC 1, 2, and 7, WTC 6 did not collapse.[7] 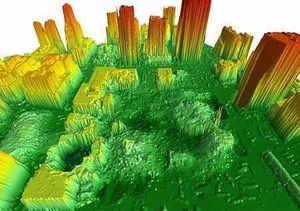 WTC 6 was demolished as part of the clean-up of Ground Zero. FEMA, the agency charged with investigating the disaster, did not collect any data on this building.[citation needed]

The fate of the building is a third rail topic.[9] A Reddit user who asked about WTC6 and linked to this page in 2016 had his account deleted. [10] 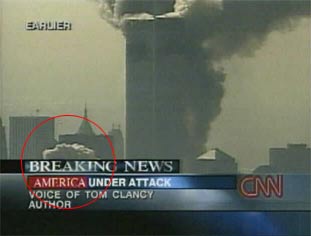 Does the red circle indicate evidence of an explosion at WTC6?

Commercially-controlled media has shown no interest in the fate of the building, just as for several years after the day of its destruction it ignored WTC7. On the day, however, CNN reportedly aired video suggestive of an explosion in the building.[1]