Sir Frank Lowy is an Australian businessman who, in partnership with US real estate developer Larry Silverstein, has been fingered in the events of 9/11.[1][2][3] He is chairman of Westfield Corporation, a global shopping centre company with around US$30 billion of assets under management in the United States, United Kingdom and Europe.[4]

On 12 December 2017, Paris-based company Unibail-Rodamco announced the takeover of Westfield Corporation for A$32.8bn (£18.5bn) subject to court and shareholder approvals. “Assets I’ve spent my life building, I could not imagine a better home for them than in this new company," Lowy said via a webcast from the Westfield headquarters in London.[5]

Frank Lowy was planning to chair an advisory board, and the family to maintain a substantial investment in the group, according to the statement.[6]

“Fifty days before 9/11, Frank Lowy and Larry Silverstein bought the World Trade Centre in New York (how unlucky was that?) at a time when there was a requirement for massively expensive renovation and asbestos removal from the buildings:

‘To maintain the trade center as class-A office space commanding top rents, the Port Authority (previous owners) would have had to spend $800 million rebuilding the electrical, electronic communication, and cooling systems.’

The removal of asbestos raised this figure to well in excess of $1 billion.

Lowy and Silverstein double-insured the WTC for multiple terrorist attacks (meaning they could claim for the same damage twice if two planes or attacks were involved) and collected $4.577 billion for WTC’s 1, 2, 4 and 5 and $861 million for WTC7. Total $5,438,000,000. 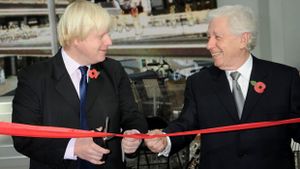 Served as an Israeli commando, and prior to that he was a member of the Israeli terrorist group Haganah.

With a personal net worth of over $8 billion, he is currently rated the third richest Australian. He made his billions from shopping Malls, he co-founded and owns the Westfield Corporation, he leased the main shopping concourse at the World Trade Centre, his company owns the largest shopping mall in London, the Westfield Shopping Centre, at all times Frank Lowy serves the Israeli/Zionist agenda.

Westfield London is right beside the Grenfell Tower.

The above are just a few facts about Frank Lowy, I will leave you all to draw your own conclusions![8]

On 17 June 2017, Foreign Secretary Boris Johnson[9] recommended a knighthood for the Chairman of Westfield Corporation, Mr Frank Lowy, who said:

"I am deeply honoured to be appointed a Knight Bachelor by Her Majesty Queen Elizabeth II in the Birthday Honours List announced today."

His citation for the award reads:

“Frank Lowy is recommended for his contribution to the UK economy through the company he founded, Westfield, and its major investments in the UK. The group has opened Europe’s two largest urban shopping centres, Westfield London and Westfield Stratford City and has recently submitted a planning application for a new one billion pound plus retail development in Croydon which will create thousands more jobs. He has also been involved in a number of philanthropic activities in the UK including with the Cabinet Office War Rooms, the Imperial War Museum and the Victoria and Albert Museum.”

Lowy said he had a deep and abiding respect and affection for the United Kingdom.

“I had been trying to establish a business in the UK since the mid-1970s but for various reasons it wasn’t until 2000 that we finally made it. That breakthrough was enormously satisfying, and I’m proud that we have been able to make such a powerful economic contribution, as well as support a number of very worthy philanthropic projects.”

Lowy said the genesis of his regard for the UK was listening to the BBC World Service as a young boy in war-torn Eastern Europe. He recalls that as a child he would huddle around a radio in a bunker, listening to the chimes of Big Ben in London introduce the latest war news:

“It always gave us hope that help was on the way, and that the war would end in our favour. From that time on I associated the British people with freedom and humanity and the sound of those chimes brings back those memories to this very day. On behalf of my colleagues at Westfield and my family, I want to place on record my appreciation for this honour and re-commit myself and our company to making a contribution to the economy and people of the UK.”[10]