Sinking of the MS Estonia

The MS Estonia was a ferry which sank in the Baltic Sea on 28 September 1994 en route from Tallinn, Estonia, to Stockholm, Sweden, claiming over 850 lives. Officially an accident, evidence has emerged which does not this narrative does not explain.

“What has become increasingly clear is that the thousands of human lives carried on Estonia were considered as human shields for criminal gangs who were involved in transporting secret shipments of Soviet military technology and weaponry to the west. These criminal elements have used their ill-gotten wealth and power over their lackeys in the political and media elites to resist and prevent any further meaningful investigation of this unsolved crime.”
Helje Kaskel (September 27 2005)  The Greeting of Helje Kaskel at the Symposium on the Sinking of Estonia [1]

A tragic accident, due to a combination of factors, including uneven loading of cargo, rough seas and ill advised behaviour (turning too fast) by the ship's captain.[2] 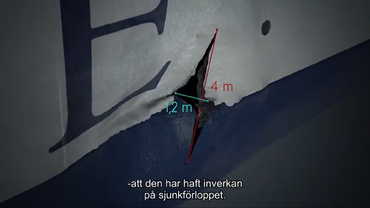 The 2020 diving expedition found a large hole in the hull, indicative of collision, which does not fit the official narrative.

The Swedish government at first promised to raise the wreck and to spare no expense determining the cause of the sinking, but changed its mind, refusing all pleas from the bereaved relatives to bring the Estonia to the surface, although it sank in shallow waters.[3] As a preliminary step, thousands of tons of pebbles were dropped on the site, but the idea was abandoned, after reported opposition from victims' families.[4]

The Estonia Agreement 1995 is a treaty among Sweden, Finland, Estonia, Latvia, Poland, Denmark, Russia and the UK, which prohibiting these nation's citizens from even approaching the wreck.[5] The treaty is, however, only binding for citizens of the countries that are signatories. At least twice, the Swedish Navy has discovered diving operations at the wreck. The wreck is monitored by radar by the Finnish Navy.[6]

Stephen Davis wrote in 2005 for the New Statesman that "this man, a retired MI6 officer whom I have known for many years, told me that the sinking of the Estonia was not an accident and that Britain and the Baltic nations had good reason to want the wreck buried" and that "tests at laboratories in the US and Germany showed signs of an explosion on the ferry's hull."[3] A commission of experts appointed by the Meyer shipyard which constructed the Estonia concluded that the bow door was separated by two explosions below the waterline and that video footage showed unexploded charges on the wreck still in place. The commission took the stand that this was done to stop weapons delivery out of Russia.[7] Later technical analysis which was published in Advanced Materials & Processes in 2009 concluded that the metal of the samples did not show wear and tear, but rather changes in the structure that are consistent with those caused by a high energy event, like an explosion.[8]

A diving robot was lowered to the wreck and discovered a hole in the hull which was previously unknown. Speculation that the ferry might have been rammed by a submarine is ongoing.[9] The first diving operations of this kind were done in the 90s financed by German public television broadcaster for a documentary.

Chris Bollyn observed that it happened the day after a remarkably similar terrorist drill the day before, and believes that this was a false flag attack.[10]

9 September 2020 Sunvalley  Basics on this event - deserves some expansion in the future.
Of note, this is the first time in my life I heard that something is the work of intelligence... as a boy when it just happened, from people on the street talking about it.