"After a period as Head of Staff in the Superpréfecture of Alsace-Lorraine-Champagne (1950-52), he joined the European Civil Service, and served as Principal Private Secretary to Jean Monnet, President of the High Authority of the new European Coal & Steel Community (ECSC). Mr. Berthoin first took up duties in London in 1956 as Deputy Chief Representative of the ECSC. Between 1978-81, he was International Chairman of the European Movement and since, International Honorary Chairman. He was a member of the Nine Wise Men Group on Africa (1988-89), and is a member of the Board of Aspen, Berlin and of the International Peace Academy in New York. Mr. Berthoin is Honorary Chairman of the Jean Monnet Association and was a Trilateral Commission Task Force author on The Reform of International Institutions (1976, with C. Fred Bergsten and Kinhide Mushakoji)."[1]

Berthoin was a member of the European coal and steel commission cabinet. Berthoin has revealed the initial idea of the EU was to create a closer union.[2] 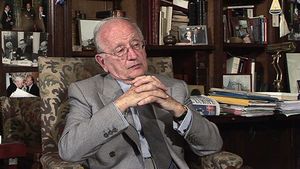 +
Has image2
File:Georges Berthoin.jpg +
Has nationality
French +
Has nndb
http://www.nndb.com/people/316/000030226/ +
Has noRatings
0 +
Has objectClass
Person +
Has objectClass2
Person +
Has parent
Jean Berthoin +
Has posting
Private Secretary to the Jean Monnet +  and Private Secretary to the French Minister of Finance +
Has revisionSize
1,994 +
Has revisionUser
Robin +
Has wikidata
https://www.wikidata.org/wiki/Q3102283 +
Has wikipediaPage
https://fr.wikipedia.org/wiki/Georges Berthoin +
Has wikipediaPage2
https://fr.wikipedia.org/wiki/Georges_Berthoin +
Is not stub
true +
Has subobject"Has subobject" is a predefined property representing a container construct and is provided by Semantic MediaWiki.
Georges Berthoin +  and Georges Berthoin +