Shāh Karim al-Husayni[1] known by the religious title Mawlana Hazar Imam by his Ismaili followers and elsewhere as Aga Khan IV,[2] is the 49th and current Imam of Nizari Ismailis, a denomination within Shia Islam.

He has held the position of imam and the title of Aga Khan since 11 July 1957,[3] when, at the age of 20, he succeeded his grandfather, Sir Sultan Muhammad Shah Aga Khan III. The Aga Khan is the spiritual leader of some 20 million Ismaili Muslims, who donate money to him their leader, or 'bringer of light'. As leader, he is considered infallible and immune from sin.[4]

The Aga Khan is a business magnate with British, Swiss, French and Portuguese citizenship,[5][6][7][8][9][10] as well as a racehorse owner and breeder. Aga Khan's net worth has been estimated at $13.3 billion.[11] Forbes describes the Aga Khan as one of the world's fifteen richest royals. Additionally he is unique among the richest royals as he does not rule over a geographic territory.[12]

In 1991 Police intercepted over $100 Million USD being smuggled for the Aga Khan from Canada and the United States to his Swiss Bank Accounts in Geneva.[13]

In 2008, French president Nicolas Sarkozy, using an obscure diplomatic 'courtesy' fiscal status, exonerated him from paying any tax at all. He is a personal friend of Queen Elizabeth and Prince Philip[14], the Spanish king Juan Carlos and others[15],

His family has long and deep connections to British intelligence services and other deep state networks. His status and operations resembles that of Fethullah Gülen, the Turkish multibillionaire leader of the faith-based Gülen movement with close ties to the CIA.

At Harvard, he was roommate of Jay Rockefeller.[16] 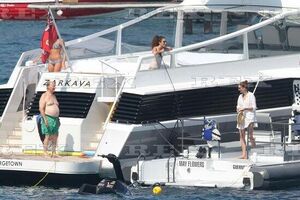 The Aga Khan and some young ladies on his previous yatch

The Khan has longtime connections to the Trudeau family, and first developed a friendship with Pierre Trudeau in the late 1960s. He became PM in 1968[17]. He was a pallbearer at the Pierre's funeral.[18] Pierre and the Aga Khan’s uncle Prince Sadruddin Aga Khan were also members of the Club of Rome.

In 2017 his son Prime Minister Justin Trudeau and his family accepted flights and a stay at the Aga Khans secluded private island in the Bahamas. It wasn't the Trudeau family's first time on the island. Trudeau had also accepted a vacation for himself and his family in December 2014, and his wife Sophie Grégoire Trudeau set up a trip in March 2016 with a friend of hers and their children.[18]

Previously the Khan had a mansion on Sardinia, Italy

The Khan spends hundreds of millions of dollars on yachts. The Alamshar, ready in 2014, took 13 years to build, with the intention to break the world speed record for super-yachts of 65 knot.[20] Together with Italy's most powerful businessman Giovanni Agnelli, he sponsored the fastest crossing of the Atlantic.[21]

The Aga Khan Foundation is the principal grant-making agency for social development within the Aga Khan Development Network. The monies collected by Aga Khan Foundation are distinct from those collected within the Ismaili Centers around the world from members of the community which are also cited for lack of transparency. The Aga Khan refuses to disclose how much he or the AKDN raise each year from their followers nor how it is allocated. And he won’t give performance figures for the Aga Khan Fund for Economic Development SA, a Geneva-based holding company that owns stakes in 90 companies. All profits and dividends from the companies and projects are reinvested, he says. In addition to money from his Ismaili followers, the Aga Khan obtains bank loans and grants from western governments and aid organizations to finance his empire[22]

In 2015, the Aga Khan Foundation Canada spearheaded a report outlining funding strategies to meet financial goals required to implement the United Nations Agenda 2030. They called for a broad partnership between governments, agencies, foundations, and corporations to determine a detailed costing for the Sustainable Development Goals (SDGs) in order to meet global health challenges over the next 15 years. The report “Innovative Financing Mechanisms for Health” included the World Health Organization (WHO), The Global Alliance for Vaccines and Immunizations (GAVI), and UNITAID (which consists of George Soros, Bill & Melinda Gates Foundation, and the Clinton Global Health Initiatives.[23]

This page imported content from Wikipedia on 22.11.2021.
Wikipedia is not affiliated with Wikispooks.   Original page source here
Retrieved from "https://wikispooks.com/w/index.php?title=Aga_Khan_IV&oldid=233685"
Categories: