From Wikispooks
(Redirected from Fhimah)
Jump to navigation Jump to search

Lamin Khalifah Fhimah is a former station manager for Libyan Arab Airlines at Luqa Airport, Malta. On 31 January 2001, he was found not guilty and acquitted of 270 counts of murder in the Pan Am Flight 103 bombing trial by a panel of three Scottish judges sitting in a special court at Camp Zeist, Netherlands.[1]

His co-accused, Abdelbaset al-Megrahi, was found guilty by unanimous decision of the court and sentenced to life imprisonment, but later released for compassionate reasons.

Fhimah was born and lives in Suq el Juma'a, near Tripoli, Libya, with his wife and five children.

The three Scottish judges sitting without a jury announced their verdict on 31 January 2001. The judges were unanimous in finding the second accused, Lamin Khalifah Fhimah, not guilty of the murder charge. Fhimah was freed and returned to his home at Souk al-Juma in Libya on 1 February 2001. The conspiracy to murder charges having been dropped, Megrahi was found guilty and sentenced to life imprisonment. 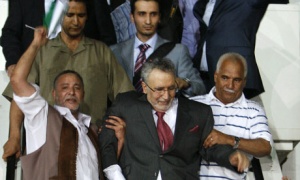 On 20 August 2009, al-Megrahi, who was terminally ill with prostate cancer, was granted a compassionate release and flew home to Tripoli later that day. Fhimah was one of the first to greet Megrahi at the top of the aircraft steps. Clad in a traditional white boubou and a brown waistcoat, he can be seen grasping Megrahi's right arm in support as he waved a small Libyan flag enthusiastically at the gathered crowd of well-wishers.[2][3]

In June 2011, it was reported that the Scottish Crown Office, anticipating the collapse of Libya's Gaddafi regime, was in the process of re-examining the evidence against Fhimah since a change in double jeopardy laws provided the possibility of an accused person to stand trial a second time if compelling new evidence came to light.

Scottish prosecutors recently interviewed Libyan defector Moussa Koussa, Gaddafi’s former foreign minister and intelligence chief, when he was on British soil, and it is believed a number of questions about Mr Fhimah had been raised during the interview. 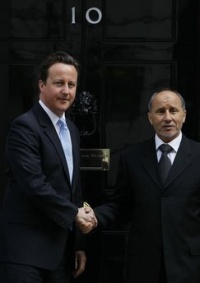 David Cameron and Abdul Jalil in talks at Number 10

In an interview with The Times of London, the new Lord Advocate Frank Mulholland QC, appealed for Koussa’s fellow high-ranking Libyan defector, former justice minister Mustafa Abdul Jalil, to come forward with information on the bombing. Mr Abdul Jalil, who is now the head of the provisional Libyan government in Benghazi, had said in a number of interviews that he had evidence of Gaddafi’s involvement in the 1988 bombing.
In one interview, he had told Swedish newspaper Expressen that Gaddafi had personally ordered the Lockerbie bombing:

"I have proof that Gaddafi gave the order about Lockerbie," he said, but did not describe the proof. "To hide it, he (Gaddafi) did everything in his power to get al-Megrahi back from Scotland," Abdul Jalil was quoted as saying.

Mr Mulholland meanwhile told The Times of London in the interview:

"I cannot send our investigators into an unsafe place but he (Abdul Jalil?) could pick up the phone. If he has relevant information on Lockerbie we would be delighted to see it. If a meeting can be arranged we would be prepared to see him in another country. The interview with Moussa Koussa was easier to arrange because he was in UK jurisdiction so it was quicker."[4]

On 14 May 2011, Mustafa Abdul Jalil - chief of Libya's Transitional National Council (TNC) - arrived in London for talks with Prime Minister David Cameron. At the Downing Street meeting, did Cameron ask Abdul Jalil about Gaddafi ordering the Lockerbie bombing? It seems not.[5]

This page imported content from Wikipedia on 9 June 2014.
Wikipedia is not affiliated with Wikispooks.   Original page source here
Retrieved from "https://wikispooks.com/w/index.php?title=Lamin_Khalifah_Fhimah&oldid=75176"
Categories: