This page lacks much of the history of the war. Additions are particularly welcome.

The post-coup unrest in Eastern Ukraine escalated when anti-coup rebels took over civil administration buildings in a number of town and cities in the Donetsk and Lugansk Oblasts in early April 2014. The civil war proper effectively began when the Kiev junta announced what it termed an "Anti-terrorist-operation (ATO)" on 15 April 2014 and began to deploy military forces in and around these Towns and cities. 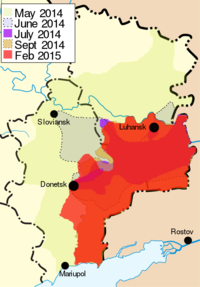 Russia had mobilized an invasion force in early 2014 but choose not to move into the country at large. RUSI did an analysis of troop numbers/deployments and scenarios.[1] It wrote at the time:[2]

The new terminal building at Donetsk International Airport, which had been a site of fighting between Ukrainian and separatist troops since May 2014, was captured by the DPR forces on 15 January.[3] One week later, the separatists had overrun the entre airport and Kiev forces had retreated in chaos.[4]

Separatist forces also increased the pressure on the Kiev-controlled town of Debaltseve in north-eastern Donetsk Oblast, barraging it with artillery fire.[5] In addition, the DPR launched an attack on Mariupol during the morning of 24 January. A hail of Grad rockets killed at least thirty people, and wounded another eighty-three. [6]

French president François Hollande and German chancellor Angela Merkel put forth a new peace plan on 7 February. The Franco-German plan, drawn up after talks with Ukrainian president Petro Poroshenko and Russian president Vladimir Putin, was seen as a revival of the Minsk Protocol. President Hollande said that the plan was the "last chance" for resolution of the conflict. The plan was put forth in response to American proposals to send armaments to the Ukrainian government, something that Chancellor Merkel said would only result in a worsening of the crisis. [7] [8] 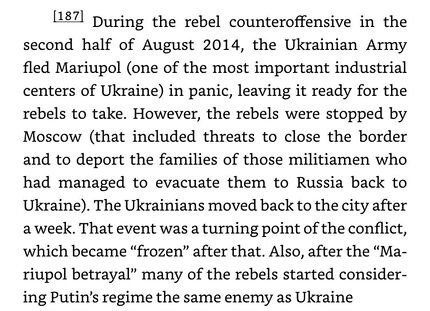 A comment about the "Mariupol betrayal" early into the war from the separatists side.[9]

A summit at Minsk on 11 February resulted in the signing of a new package of peacemaking measures, called Minsk II, on 12 February which was similar in content to the failed Minsk Protocol, and called for an unconditional ceasefire, to begin on 15 February, amongst many other measures.[10] Fighting continued around Debaltseve until 18 February, when Ukraine forces were forced to retreat, leaving separatist forces in control of the town.[11] 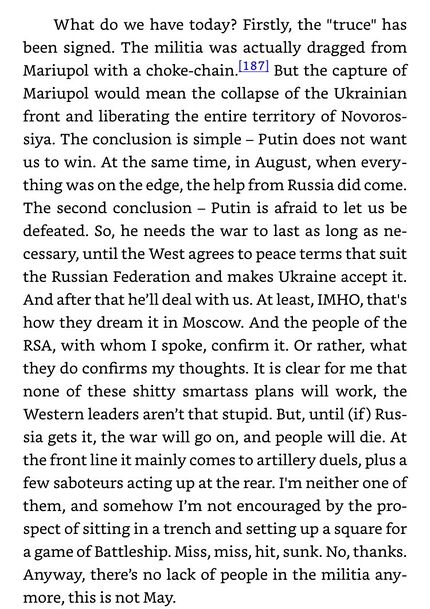 The day after Minsk II, James Mountain "Jim" Inhofe, the senior US senator from Oklahoma, was caught out trying to pass off fake photographs of Russian involvement in Ukraine to boost support for his bill, which would enable the US to provide lethal military aid to the Ukrainians.[12][13][14][15]

The USAF announced that it would be sending 12 A-10 ground-attack aircraft to Spangdahlem Air Base, Germany, by the end of February. This was described as being part of Operation Atlantic Resolve, set up following Russia's "intervention in Ukraine". Apart from operating in Germany, the A-10s will be forward deployed to other partner nations in Eastern Europe. US forces have operated out of bases in Lithuania, Estonia, Latvia and Poland, among others, in the past year.[16]

Canada, which had been helping the the government of Ukraine for ten years, was called on by Ukraine's deputy foreign minister, Vadym Prystaiko, to start supplying lethal weapons and training on how to use them. Prystaiko, whose father was once the vice-chairman of the SBU (Security service of Ukraine), said that Kiev is preparing for "full-scale war" against Russia and that "the world must not be afraid of joining Ukraine in the fight against a nuclear power."[17][18] In 2007, Prystaiko was part of Ukraine’s NATO negotiating team, and served as the Deputy Director General for NATO in the Ministry of Foreign Affairs. [19]

The Ukrainian currency has lost about 50% in value since the start of the civil war. The IMF agreed, on 12 Feb 2015, to throw a $17.5 billion, four-year lifeline to Ukraine. Combined with the $4.6 billion from the previous package, this brings the total (so far) to over $22 billion, which won't be enough. The EU is also to provide $2 billion in loans, while the US has pledged $2 billion in loan guarantees. Altogether, the package from the west is estimated at $40 billion over four years. But, as the NYT puts it "While the fund had demanded that Ukraine begin major changes and undertake some tough austerity measures in exchange for last April’s rescue, the country’s economic problems have outpaced the prescriptions." Ukraine’s new finance minister, Natalie Jaresko, has been negotiating with the I.M.F. and urging international creditors to view Ukraine as a long-term investment. Jaresko is a US citizen, ex-Harvard, ex-US State Dept and ex US Embassy in Kiev. She was granted Ukrainian citizenship on 2 December 2014.[20][21][22][23] According to Robert Parry, she was once at the center of insider deals and other questionable activities when she ran a $150 million US-taxpayer-financed investment fund.[24]

A UN count of civilian casualties found that civilians on the side of the separatists areas are much more likely to get killed by 'hostilities' (most of the times by mortar/howitzer shelling).