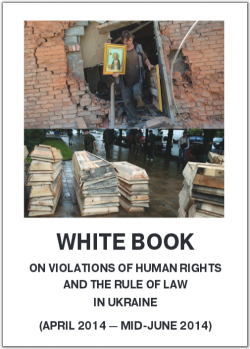 After the publicaton of the first edition of the ‘White Book’ which summarized multiple factual violations of human rights and of the rule of law in Ukraine from the end of November 2013 to the end of March 2014, the political crisis in that country has gained momentum. A lack of willingness from the de-facto Kiev authorities to respect the legitimate interests of south-eastern Ukraine, and their tendency to speak with local people who come up with legitimate demands from a position of force, resulted in the further escalation of the intra-Ukrainian crisis. Carrying out a so-called ‘anti-terrorist operation’ — a retaliatory operation in fact — announced by the self-proclaimed Kiev authorities was followed by a dramatic increase in the number of serious human rights violations. As well as ‘post-Maidan’ human rights violations in Ukraine (violating the right to freedom of expression and restrictions on the freedom of the media, manifestations of extremist, ultra-nationalist and neo- Nazi sentiments, religious intolerance and xenophobia, the intimidation of political opponents, their ‘cleansings’ and arrests, repressions and physical violence), there are new problems such as the violation of the norms of international humanitarian law by Kiev, reflected by the use of heavy weaponry and military aircraft during the retaliatory operation in the east of the country that resulted in a large number of victims among civilians, the problem of internally-displaced persons and refugees, including children, and a difficult humanitarian situation in general.

We could not turn a blind eye to the horrible tragedy in Odessa on May 2 when, under the watch of local authorities, dozens of people were brutally murdered by Ukrainian ultra-nationalist and neo-Nazi militants. The only guilt these people had was that they had different political views on the future of Ukraine. Still, none of the people who committed this insidious crime has been punished yet

We would like to hope that the investigation initiated by the Kiev authorities would not be protracted or politicized as happened with the so-called ‘sniper case’, when destructive fire in Kiev in February 2014 resulted in the same unidentified snipers killing both protesters and law-enforcement officers.

All these issues were reflected in the second edition of the ‘White Book’ on Ukraine. However, we did not set a difficult task of reflecting all the tragic events that happened in this country. Nevertheless, the facts cited are enough to come to the discouraging conclusion that Ukraine has faced the gravest human rights challenges to which Ukrainian authorities cannot yet provide adequate responses.

This study covers the period from April to mid-June 2014. Just as in the first edition, the results of a thorough monitoring of Ukrainian, Russian and some Western media; remarks and statements made by the Kiev authorities and their supporters; numerous evidences, including those posted on the Internet, as well as the materials collected by the Moscow Bureau for Human Rights, the Information Group of Crimes against the Person and the OSCE Special Monitoring Mission, were used as a factual basis.

Excerpts from the fundamental international instruments on human rights, whose universal provisions and norms have been violated in Ukraine during the indicated period, precede each section of this study.

As before, we believe that the main task of the second edition of the ‘White Book’ is to focus attention on the facts of the international community and key international human rights bodies, as well as relevant non-governmental organizations which have not yet shown proper and impartial attention to these issues

The upsurge of protests in the south and east of Ukraine was a direct consequence of the change of power in Kiev as a result of the anti-constitutional violent coup that was carried out by Euromaidan advocates with active support of the United States and a number of European Union countries. After the Verkhovna Rada was forcibly and roughly reset to suit the goals of the former opposition leaders, including radical nationalists, those who did not accept the new Ukrainian order have been subjected to a serious threat, including the threat to their lives.

The tragic events in Odessa, Mariupol and other cities of the southeast have become yet another confirmation of the Kiev authorities’ criminal use of crude force and intimidation in violation of the commitments stemming from the agreement of February 21, 2014 and the Geneva statement of April 17, 2014.

The facts quoted in the White Book are evidence of the criminal nature of the “anti- terrorist operation” with its treacherous shelling of civilian facilities and killings of Ukrainian civilians, including women, old people and children.

We are gravely concerned that the majority of crude violations of human rights and the principle of the rule of law have not evoked an adequate and clear response from the international community and international human rights bodies. This creates the impression that the punitive operation by the Ukrainian law enforcement bodies against their own people enjoyed the tacit support of some European capitals from the very start. Naturally, this state of affairs is creating a feeling of impunity in those who are issuing cynical and criminal orders, be it to throw bombs at peaceful cities and villages, abduct dissenting journalists or conduct political censorship of the media. After his inauguration President Petro Poroshenko announced the need for a ceasefire in southeast Ukraine but the bloodshed continued and civilians were still dying at the moment this publication was sent to print.

We hope that the Western patrons of the Ukrainian authorities will finally prompt Kiev to stop the annihilation of people in the southeast, who have the legitimate right to have an equal say in determining the future of their country. We also hope that profile international agencies will fulfil their mandates by conducting an unbiased and politically neutral inquiry into numerous violations of human rights and the principle of the rule of law in Ukraine. The culprits must be brought to justice.