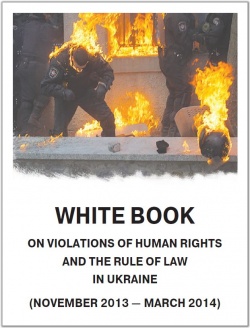 
The book is divided into six chapters

This study covers the period from the end of November 2013 to the end of March 2014 and deals with the situation with human rights and the rule of law that emerged in Ukraine as a result of a violent seizure of power and unconstitutional coup. As a factual basis, a careful monitoring of Ukrainian, Russian and some Western media reports was conducted, covering statements and announcements made by the leaders of the “new government” of Ukraine and their supporters, numerous eyewitness accounts, including those posted on the Internet, as well as records based on observations and interviews with people on the scene, and those collected by non-governmental organization The Foundation for Researching Problems in Democracy, and the Moscow Bureau for Human Rights. Excerpts from the basic international documents on human rights whose universal regulations and standards have been violated in Ukraine during the indicated period precede each section of this study.

We do not claim to report exhaustively in this White Book all tragic events that took place in Ukraine. Nonetheless, the present list of the most flagrant violations of fundamental international norms of human rights and the rule of law committed in this country, by ultranationalist, neo-Nazi, and extremist forces which have monopolized the Euromaidan protests, far from being exhaustive, gives enough grounds to claim that such violations were widespread. 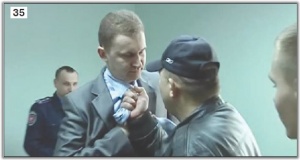 Coordinator of the Right Sector, Sashko Biliy, clearly explains to the Rivne Oblast prosecutor who represents the real authority in Ukraine

The essential task of this White Book is to focus on facts to which the international community and key international human rights bodies, as well as relevant nongovernmental organizations have not shown proper and impartial attention.

The history of the twentieth century has given tragic lessons which would be irresponsible and also at times just unlawful to ignore. The White Book is a signal to those who have forgotten this or pretend to forget. Those who cynically, in pursuit of their own selfish interests and under the guise of good intentions and pseudo-democratic demagogy, are plunging a multimillion multi-ethnic Ukrainian population into extremism, lawlessness, and a deep crisis of national identity. The onslaught of racism, xenophobia, ethnic intolerance, the glorification of the Nazis and their Banderite sycophants should be brought to a speedy end through the united efforts of the Ukrainian people and the international community. The alternative is fraught with so devastating consequences for peace, stability, and democratic development in Europe, that it is absolutely necessary to prevent further escalation of this situation. 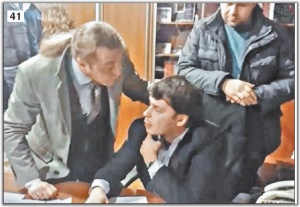 Deputies of the Svoboda Party used their fists to question General Director of the National Television Company of Ukraine, Alexander Panteleimonov, about why his TV channel broadcast the signing of the act of Crimea's joining to Russia

The facts set forth above clearly demonstrate that under the influence of extremists from ultranationalistic and neo-Nazi forces, and with the active multidimensional support of the USA and the European Union and its members, the protests in Ukraine which bore an initially peaceful character rapidly escalated into a coercive rebellion and, in the end, the forceful seizure of power and an unconstitutional coup d'etat. These dramatic events were accompanied by widespread and gross violations of human rights and freedoms on the part of the self-proclaimed government and its supporters. As a result, manifestations of extremist, ultranationalist, and neo-Nazistic sentiments, religious intolerance, xenophobia, blatant blackmail, threats, pressure placed by the Maidan leaders on their opponents, «purges» and arrests amongst them, repression, physical violence, and sometimes plain criminal lawlessness have become commonplace in Ukraine.

In all of Ukraine’s regions, but especially in the southeastern part of the country, Ukrainian radical nationalists, instructed by the de facto authorities in Kiev and their external patrons, are ramping up the pressure on Russian-speaking citizens who do not want to lose the centuries-old ties that bind them to Russia and Russian culture. Moreover, affairs are being conducted Maidan-style — through the use of threats, intimidation, physical violence, and heinous attempts to obliterate Russian culture and identity among the inhabitants of these regions of Ukraine.

Unfortunately, all of the gross human rights violations and violations of the principle of the rule of law that have been committed and are still being committed remain unpunished. Moreover, the bandits from Euromaidan who, weapons in hand, committed atrocities against the legal authorities and citizens have been amnestied by the Verkhovna Rada of Ukraine and declared national heroes. We are convinced that if the lawlessness in Ukraine continues, the situation may erupt into a serious threat to regional peace and security and lead to further escalation of international and interethnic contradictions and conflicts in Ukraine and Europe in general.

We hope that this fact will finally be recognized in the relevant international organizations, which in accordance with their mandates must contribute to the conducting of objective and non-politicized investigations into the numerous violations of human rights and the principle of the rule of law in Ukraine. The perpetrators must be duly punished. Otherwise, extremists of all stripes and colors will receive a dangerous signal of encouragement.