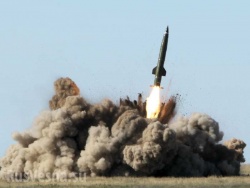 There have been multiple reports of multiple SS ballistic missile launches against NAF-held areas of Eastern Ukraine since mid-July 2014. [1] [2] At least two such reports were accompanied by pictures of massive craters where the missile warheads were said to have detonated. [3] However, others have shown pictures of missile parts and even recognisable, near intact missiles. [4] The claim of this article is that the launching of these missiles - which in every case has been more or less towards the Russian border and close enough to make calculation of its target ambiguous and thus possibly well inside Russia itself - is a carefully calculated exercise, supervised by the US, to gather evidence about the capabilities and effectiveness of Russia's missile defense systems.

Wikispooks cannot vouch for the nature of the ultimate source of the article but, for sure, given the nature of the civil war in Ukraine, with the Junta military under the clear and obvious direction of the US with its vast number of US specialists ensconced in Kiev, it is the most plausible explanation of the deployment of these missiles and another indication - if any were needed - of the relentless aggressiveness of Anglo-US-NATO pressure on Russia.

The confusing story around the launching of ballistic missiles, most likely “Scarab B” (Tochka U) type, by the Ukrainian military is not as simple and innocent as it looks at first glance. In fact, it appears that the US has just tested the preparedness of the Russian Missile Defence System for real combat in regions adjacent to Donetsk and Lugansk.

Ballistic missiles are the most powerful weapon that the Ukrainian military has at its disposal, and also the most powerful weapon that has ever been used in modern armed conflicts. It is important to note that these missiles are capable of carrying nuclear warheads, and the Ukrainians, or rather the US military who are, in fact, in charge of the operation in Eastern Ukraine, knew exactly what they were doing.

There were reports of three separate launches of “Scarab B” missiles. Interestingly enough, mass media did not report any consequences on the ground that should’ve resulted from strikes by this powerful weapon. The explanation is simple – none of the missiles reached their targets and were destroyed in the air by missile defence systems. Another evidence supporting this is a large fragment of the missile (warhead just under 180 cm in size) found on the ground by militiamen. The missile fell apart in mid-air.

If the missile had reached its target, no fragments of that size would be left, and the warhead would’ve definitely been destroyed. Militia does not have Missile Defence systems, which means that the missile must have been shot down by the Russian forces. Especially considering the proximity of the area to the Russian border. The question of what was used to shoot these missiles out of the sky remains unanswered, and, most likely, will never be answered (classified information). 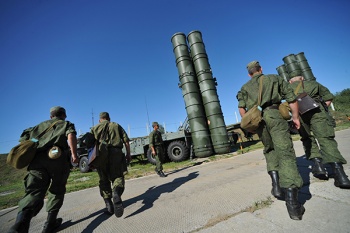 "Tochka U" (Scarab B") missile system deployed for launch

Another interesting fact is that it was the US news agency CNN that first aired the story about the “Scarab B” launches. Their report was based on information received directly from the Pentagon, which implies that the main intended recipient of the information was Russia. The US quickly assured everyone that the targets of the strikes were military installations of the militia (and not anything on Russian territory, God forbid), and later the Western media downplayed the information. The US Secretary of State John Kerry issued a statement calling for an immediate stop to all armed hostilities in Eastern Ukraine.

The most likely reason for this diplomatic turnaround was a conversation between Lavrov and Kerry that took place almost immediately after the information about missile launches became public. The conversation was initiated by the US side and, interestingly enough, it took several attempts to get the Russian Foreign Affairs minister to agree to hold the talks. During the conversation, Lavrov took the opportunity to issue a number of demands.

Currently both sides are sidestepping the topic. On one side it is alarming to learn that the US hawks are testing the Russian air defences, but on the other it is a relief to see that Russia has a reliable Missile Defence System.