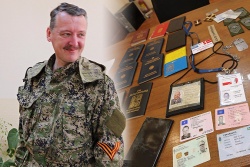 Image right: Igor Strelkov pictured 0n 26 April 2014 with the identity documents of 8 detained NATO military intelligence officers seen on the table beside him.

Translated from Russian by Storify.com

For over a month, Igor Strelkov has remained in the shadows. It is "People's Mayor" Vyacheslav Ponomarev, who has spoken on behalf of the People's Militia [Narodnoe Opolchenie] of Slavyansk, and it is he who was known as its leader. It was however evident that Ponomarev was merely the political figurehead. Military planning is carried out by another body, which is deployed in the Slavyansk SBU building. It is here that the attack on the Kramatorsk airfield was planned, during which Mi-8 and An-2 aircraft were blown up. On Saturday, another helicopter was attacked and had difficulty reaching Izium after being struck. And finally, this is where the foreign observers detained at a checkpoint on Friday were brought in for questioning.

Dennis Pushilin, member of the Bureau of the Donetsk People's Republic arrived here (Slavyansk) on Saturday 26 April 2014 to develop contacts. After a lengthy meeting, he emerged to meet the journalists, accompanied by the commander of the Slavyansk self-defense detachment, Igor Strelkov. The two men made a joint declaration announcing the unification of the political and military structures of the People's Militia. They stated that all of the self-defense forces of the Donetsk People's Republic had been placed under Strelkov's command. Immediately after his first press-conference, the commander gave his first interview to Komsomolskaya Pravda, in which he addressed the matter of the detained intelligence officers, as well as the tactics of the Right Sector, and his own motivations.

Komsomolskaya Pravda: Where did your unit come from ?

Strelkov : There are of course a great number of volunteers from other regions who are mixed in with this People's Militia. The unit with which I came to Slavyansk was formed in Crimea. I won't hide that. All of them are volunteers, and two thirds are Ukrainian citizens. Not just from Crimea. There are also refugees from other regions of Ukraine, from Vinnitsa, Zhitomir, Kiev. And of course many people from Donetsk and the Lugansk region. It is in response to their proposal that the unit decided to come specifically to Slavyansk.

KP: It's obvious from looking at your men that this is not the first time they're carrying arms...

Strelkov : The majority of men in the unit do have combat experience. Many of them who now have Ukrainian citizenship have fought in the Russian Armed Forces in Chechnya and Central Asia. Others fought in Irak and Yugoslavia with the Ukrainian Armed Forces. There are even some who've managed a stint in Syria.

KP: Where are your weapons from ?

Strelkov : On the very first day, we disarmed the Slavyansk police and seized a considerable number of firearms. We disarmed several units of the 25th Airborne Brigade from Dnepropetrovsk, paratroopers, and a unit of border guards. Altogether we took 150 automatic weapons and a number of grenade launchers. Plus six airborne combat vehicles. And a self-propelled NONA mortar.

KP: And yet there's the impression that you're avoidig open clashes with army troops.

Strelkov : We know what we're up against : the Dnepropetrovsk 25th Airborne Brigade and paratroopers. In addition to the 95th paratrooper brigade from Zhitomir. The former is made up of residents of South-East Ukraine, and the latter is not much different. These are all soldiers who were deployed here against their will ; there are no volunteers amongst them. If we start killing them, and we do have opportunities to do so, then we'll be killing our brothers. The enemy is taking advantage of that. They move conscripts into the areas controlled by the People's Militia. The Militia members won't fight them. Once that's done, the Ukrainian command sets up a checkpoint, guards it with military vehicles which it mans with fighters from the Right Sector, the National Guard and SBU special units, who then carry out their duties under the protection of the paratroopers. If we were to open fire against mercenaries and extremists in military uniform, we'd be destroying Ukrainian army soldiers at the same time. For the time being, we will not do so. Well, and nor do we want to fire at our brothers. But if this practice continues we will have to do things differently. I'll go back to the destruction of the helicopter as an example. We had the Kramatorsk airfield under observation for several days and had an opportunity to down helicopters carrying personnel. But we selected one which had only the crew on board ; it was a helicopter carrying munitions. We will try to continue operating in this way. But there's no guarantee that today, tomorrow, or the day after, ordinary soldiers might not suffer.

KP: On Friday, you detained some military observers ...

Strelkov : I showed you their documents. According to a member of the Ukrainian forces, this mission is travelling along the border to inspect the locations specifically of Russian troops. I frankly can't imagine what they were doing here. Maybe they were trying to use diplomatic cover to conduct reconnaissance for the Ukrainians on the positions of the People's Militia, hoping that as foreigners they would not be detained. Although it's more likely it's one of those brilliant strategic ideas concocted by the Ukrainian command, which doesn't know where the People's Militia posts are located. When the bus carrying the observers, accompanied by the traffic police, arrived at the checkpoint in Kramatorsk, members of the Ukrainian military started hiding their military documents in a panic . This suggests that they absolutely did not expect to encounter any armed militia here.

KP: What was the foreigners' reaction?

KP: Were they carrying any special equipment ?

Strelkov : Yes. But I don't want to divulge what kind for now. I will be conducting negotiations on their release only along with representatives of the Russian Federation.

KR: What is the ultimate goal of your militia ?

Strelkov : There's a tactical goal and a strategic goal. The People's Militia members from the local population of course want the Donetsk Republic no longer to be dependent on the will of the Kiev junta, or any other junta that might take its place. Around 80 percent of the population want unification with Russia. The motivations of those who came with me and of those who are joining us are broader. They say : We don't want to stop at what we've achieved already, we want to go further and free Ukraine of fascists.

KP: What do you expect from Russia ?

Strelkov : I'm a realist. So far, Russia has not supplied a single automatic weapon or a single cartridge. It's people in the Ukrainian army and the police who gave it all to us. For which we are deeply grateful, and we hope that they will continue to supply us. I understand that noone's going to start World War III for Slavyansk. And noone's going to start a war for Ukraine either, since it's a failed state, busy brainwashing its own citizens. It's such a stream of lies in the Ukrainian media, cheap and easily exposed lies about the People's Militia and about the people of Slavyansk and Donetsk and the Lugansk region. Their fictions are very easy to expose, it's slapdash stuff. They take advantage of the fact that they have totally captured the information space and disabled Russian channels. And this massive propaganda unfortunately is having an impact on a significant portion of the population. So people in the Central and Western regions of Ukraine seriously believe that there are gangs of mercenaries operating here who are prepared to kill or to expose women and children to bullets for a thousand hryvnia a day. That's not true. The people of Donetsk has rebelled against the junta and will fight it. We enjoy the full support of the population.

KP: What have you agreed with the Government of the People's Republic of Donetsk ?

Strelkov : We decided not to constitute multiple authorities. That's an agreement that was hard to reach. The Militia forces are very critical of the leadership of the Donetsk Republic, which was actually incapable of achieving anything after the city council was taken over. But it's essential to be united. We put forward our own demands to the leadership of the Republic. And we deliberately withdrew a number of our statements disavowing them, so as to achieve consensus.

KP: So it turns out that you have now taken command of all of the Militia units?

Strelkov : There's a lot of anarchy, but we'll unite everyone. It's not a quick process.
Retrieved from "https://wikispooks.com/w/index.php?title=Document:Igor_Strelkov_interview&oldid=77309"
Categories: