Document:The 20-year war on Afghanistan was a mistake 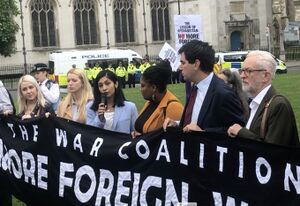 Today nearly 20 years since Tony Blair dutifully followed George W Bush to war in Afghanistan, this House has an obligation to learn its lessons and to ensure its mistakes are never repeated.

Mr Deputy Speaker, I want to start by stating a hard but clear truth that some in this House do not want to hear. The 20-year war on Afghanistan was a mistake, a mistake of catastrophic proportions, causing untold human tragedy: 240,000 people killed, men, women and children; tens of thousands of innocent Afghan civilians; and, 457 British personnel. This House must never again send British service personnel to die in futile wars.[1]

Mr Deputy Speaker, rather than repeating the mistakes of the past, we must learn this lesson for the future. The West cannot build liberal democracies with bombs and bullets. That dangerous fantasy cooked up by neoconservative fanatics in Washington and championed by their faithful followers in London has brought untold death and destruction to Afghanistan, to Iraq, to Libya and many other places in wars that have made us all unsafe. So today we must rid ourselves of the delusion that the answer to failed intervention is yet more intervention, and dispense with the belief that freedom abroad and safety at home can be won through wars and regime change.

Mr Deputy Speaker, after all of this bloodshed we have a special duty to the people of Afghanistan. Today as Afghans flee for their lives with heart-breaking images of people clinging onto planes, hoping that the sky is safer than the land, and Afghan asylum seekers already here, they must be provided with unconditional amnesty. And on this issue, I want to raise with the government again the case of my constituent Jamal and his father. Jamal was a translator for the British Army for six years and his father worked as a gardener in a British base. While Jamal made it safely to Coventry – a proud city of sanctuary – his father has been denied re-location and is still in Afghanistan in grave danger. I've written to the Secretary of State but haven't received a reply. So today I urge the government to act immediately and provide safe passage to Jamal's father, and all the Afghans who are facing that threat from the Taliban.

Mr Deputy Speaker, the war on Afghanistan was the first War on Terror. I was seven years old when British airstrikes hit that country. The now Prime Minister a few years later wrote, and I quote:

"We are in Afghanistan to teach them democracy."

Today after 20 years of bloodshed it is incumbent on us to learn that democracy cannot be bombed into existence; that American military might is no friend of freedom; and, to ensure that this first War on Terror is Britain's last war of aggression.[2]