Sebastian Kurz was the Chancellor of Austria since January 2020, a position he previously held from December 2017 to May 2019. Kurz has also been chairman of the Austrian People's Party since May 2017. Per 2021, Kurz was the youngest head of government in the world, and first elected to the post aged 31, the youngest chancellor in Austrian history. In 2021, Kurz became compared to Frank Underwood of TV-show House of Cards,[1][2] for being described as a ruthless & cunning mastermind in a deep state faction named "Die Familie" after a corruption raid exposing this network. Kurz resigned days later.[3][4]

Since leaving office, he accepted a job for the deep state billionaire Peter Thiel,[5]. Presumably for services already rendered, Kurz will be a "global strategist" at Thiel Capital, starting in the first quarter of 2022.[6]

Although never having finished with any college or university degree, Kurz is named "highly eloquent", "succinct", and "everything but sheepish"[7], Time named Kurz one of the next generational leaders - not mentioning the World Economic Forum link[8], with the financial times comparing him to Matteo Salvini and Donald Trump, warning Austria would go the same route as 1930s America.[9] 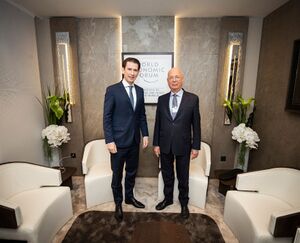 In October of 2021. Austrian police raided Kurz his office for corruption suspicions, with Austrian CCM revealing a tight knit between several newspapers, with Kurz being suspected of falsifying the Austrian election process by steering - and in one case explicitly making up - opinion polls and questionnaires. The phones of 10 political associates of Die Familie were found by coincidence finding signs of bribing media after seemingly eliminating other members of Kurz his party, and other members of the Austrian government.