Scott Morrison is an Australian politician serving as the 30th and current Prime Minister of Australia and leader of the Liberal Party of Australia since 24 August 2018. He has been a member of the House of Representatives since 2007, representing the Division of Cook in New South Wales.

Scott Morrison was born in Sydney and studied economic geography at the University of New South Wales.

Following the Coalition's victory at the 2013 election, Morrison was appointed Minister for Immigration and Border Protection in the Abbott Government.[2] In that capacity he was responsible for implementing Operation Sovereign Borders, one of the Coalition's flagship policies. In a December 2014 cabinet reshuffle, Morrison was instead made Minister for Social Services.[3] He was promoted to Treasurer in September 2015, when Malcolm Turnbull replaced Tony Abbott as prime minister.[4]

In August 2018, Peter Dutton challenged Turnbull for the leadership of the Liberal Party, due to dissatisfaction from the party's conservative wing. Turnbull defeated Dutton in a leadership ballot, but tensions continued to mount and the party voted in favour of holding a second ballot; Turnbull chose not to be a candidate. In the second vote, Morrison emerged as a compromise candidate, defeating Dutton and Julie Bishop to become leader of the Liberal Party and prime minister.[5] 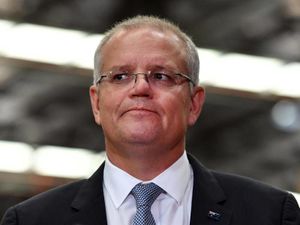 +
Has image2
File:Scott_Morrison.jpg +
Has noRatings
0 +
Has objectClass
Person +
Has objectClass2
Person +
Has posting
Prime Minister of Australia +
Has revisionSize
3,524 +
Has revisionUser
Robin +
Has wikipediaPage
https://en.wikipedia.org/wiki/Scott Morrison +
Has wikipediaPage2
https://en.wikipedia.org/wiki/Scott_Morrison +
Is not stub
true +
Source credit
Wikipedia +
Has subobject"Has subobject" is a predefined property representing a container construct and is provided by Semantic MediaWiki.
Scott Morrison +