From Wikispooks
(Redirected from McKinney)
Jump to navigation Jump to search

Cynthia McKinney is an American politician and activist who, as a member of the US Democratic Party, served six terms in the United States House of Representatives and remains a prominent voice for 9/11 truth. She was the first black woman to represent Georgia in the House.[1] In 2015, she received a Ph.D. from Antioch University for her thesis: “El No Murio, El Se Multiplico!” Hugo Chávez : The Leadership and the Legacy on Race.[2]

McKinney stated in 2010 that she "remain[s] hopeful that we will learn the truth" about 9/11 "because more and more people around the world are demanding it."[3] 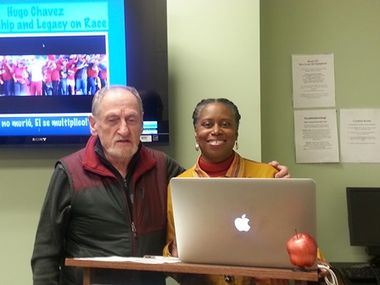 In the 2008 US presidential election, the US/Green Party nominated McKinney for President of the United States.

As of 2017, she was working as an assistant professor in North South University, Dhaka, Bangladesh.[4]

Identification of The Deep State

In February 2015, Cynthia McKinney stated that AIPAC had taken total control of the US Government and few Americans know anything about it.[5]

This page imported content from Wikipedia on 21 June 2016.
Wikipedia is not affiliated with Wikispooks.   Original page source here
Retrieved from "https://wikispooks.com/w/index.php?title=Cynthia_McKinney&oldid=230474"
Categories: