Svetlana Tikhanovskaya was a teacher and interpreter before running for the 2020 Belarusian presidential election as the main opposition candidate. She is the wife of activist Siarhei Tsikhanouski. Her husband was a candidate for the same election until his arrest on 29 May 2020, after which she announced her intention to run in his place. Tikhanovskaya claimed to have received between 60 and 70% of the vote and has appealed to Western countries to recognise her as the winner. Wikipedia as of August 2020 references her as: "President-elect of Belarus (Contested)"[1] 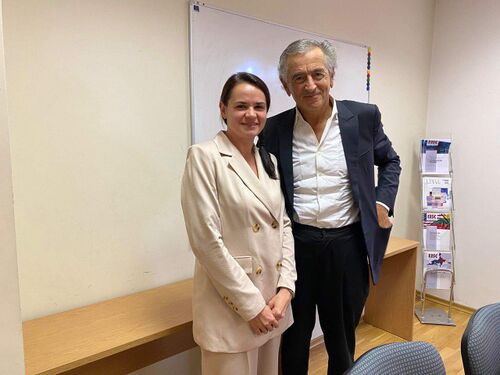 Svetlana Tikhanovskaya with Bernard-Henri Lévy, strong supporter of the Euromaidan in 2014 that brought civil war to Ukraine.[2][3]

On 3 August 2021, she visited England and met with Boris Johnson. She said they had "hopeful talks".[4]