From Wikispooks
< Afghanistan
Jump to navigation Jump to search

The Afghanistan 2021 withdrawal was agreed on 29 February 2020,[1] planned for the 20th anniversary of 9/11 and was completed before midnight on 30 August 2021, when Major-General Chris Donahue was the last American soldier to leave Kabul, and US–led NATO troops ended 20 years of occupation in Afghanistan.[2] 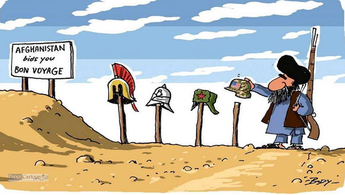 The Taliban took control by mid-August and its co-founder Abdul Ghani Baradar returned from exile in Qatar.[3]

Most of Congress condemns, two congressmen (Peter Meijer and Seth Moulton) flew secretly there to get a perspective on the situation.[4][5] 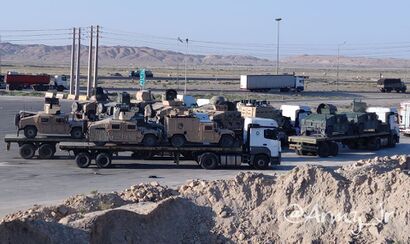 Some Hummer with different setups in Iran.[6][7]

Some in favour include Matt Gaetz, Rand Paul and Donald Trump.

CIA Director William Burns was sent to Kabul for a high level meeting on 23 August 2021.[8][9][10] Topics that were probably discussed:

Tom Luongo is of the opinion that the withdrawal is chaotic by design, leaving Afghanistan with a huge number of military rifles and warfighting equipment in a region that has been unstable due to foreign interventions for the last decades. [18]

The United States most likely was not in a financial position to bring back all/most equipment of substantial volume and weight, like armored vehicles. But those could of course have been blown up and destroyed, along with all other equipment that has now changed hands.

Other writers, such as Roger Simon, highlight the fact that the democratic establishment around Biden and the Clintons, have aided China's interests on a number of occasions.[19][20][21][22][23]

“I have believed for some time—only underscored by our extraordinarily rapid and ill-conceived evacuation of Afghanistan, leaving behind not only Bagram but enough U.S. weaponry to make the Taliban’s army nearly equivalent to Italy’s, not to mention putting our advanced military technology in the hands of the Chinese and the Russians—that a large percentage of our Democratic Party leadership, as well as a tragically significant percentage of the GOP, have long believed the Chinese regime is winning the battle between China and America for global hegemony.
They are, therefore, overtly or covertly, consciously or subconsciously, throwing in with the Chinese side for their own economic advantage, and, to a lesser extent, their survival, though the two intersect.”
Roger Simon (12 September 2021)  [24]

UK/Defence Secretary Ben Wallace says that Al-Qaeda will re-enter Afghanistan. Johnny Mercer said the UK had "chosen defeat", describing the lack of "political will" as "shameful", "sad", "humiliating for the British army", and above all a "tragedy for the Afghan people".[25]

On 18 August, UK Parliament was recalled. All mainstream newspapers condemned Boris Johnson.[27] Johnson wants to negotiate with the Taliban.

“What I want to assure people is that our political and diplomatic efforts to find a solution for Afghanistan, working with the Taliban, of course if necessary, will go on.”
Boris Johnson (20 August 2021)  [28]

Lots of countries evacuated their citizens in the largest airlift in history. 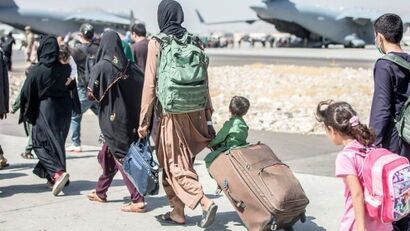 Armed Forces minister James Heappey said there were "very credible" reports of a "severe" threat in the capital.

The Foreign Office last night issued new guidance telling anyone near the airport to "move away to a safe location and await further advice".

It comes amid a race to airlift thousands from Afghanistan before foreign troops depart.

The US has set a deadline of 31 August 2021 for the withdrawal of its troops, with President Joe Biden rejecting calls from Prime Minister Boris Johnson and other allies for an extension.

Mr Heappey did not give a date for the last UK evacuation flights, but said it was likely that UK and other foreign troops would have to leave before the last American airlifts.[30]

Kabul hospital reports 30 wounded from airport blast. 6 died on the way to hospital. Suspicion falling on ISIS-K as the culprits.[31]

US President Joe Biden said he stood ready to authorise further military force in Afghanistan and the US would “hunt down” the terrorist attackers that have left more than 100 dead, including 13 US marines, near Kabul airport.

In a televised address, he said the US would not be deterred by terrorism and the attacks would not shift the US from its timetable to complete the evacuation of US citizens by August 31.

“To those who carried out this attack, know this, we will not forgive, we will not forget, we will hunt you down and make you pay,” he said. “We have some reason to believe we know who they are, although we aren’t certain,” he added at a press conference at the White House.[32]