Richard Thomas Medhurst (born 1992) is an independent journalist and commentator whose reporting focuses primarily on international relations, the Middle East and US politics, and is rooted in anti-imperialism.

Richard Medhurst is one of the few journalists to have covered the Julian Assange extradition case in London; he has done extensive coverage on Palestine, the Iran nuclear deal and war on Syria.[1]

Richard Medhurst was born in Damascus to a British father, and Syrian mother. His parents were Nobel Peace Prize winning UN peacekeepers. He is fluent in four languages: English, French, Arabic and German. He started his YouTube show in late 2019[2] 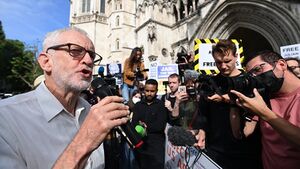 Richard Medhurst has provided full coverage of Julian Assange’s extradition hearing at the Old Bailey[4] and Royal Courts of Justice[5] in London:

"I witnessed his show trial at the Old Bailey in London. The Australian journalist and WikiLeaks founder faces up to 175 years in jail for exposing US war crimes."[6]

On 11 August 2021, Medhurst tweeted a video of MP and former Labour leader Jeremy Corbyn speaking outside the Royal Courts of Justice among Julian Assange supporters:

"I hope the court accepts the decision of the lower court. He should not be removed to the United States.

"My view is that he should be released.

"His health is clearly at risk while he's in Belmarsh. A worse risk if he's in a supermax prison in the United States.

"He's a man that has actually done the whole world a very good service as some of our newspapers recognise, like The Guardian in the earlier stages of this. So I say to the journalists that are here I have plenty of issues with the way the media report things in this country. I have good reason to have complaints about the way the media treated individuals in this country but I hold no bitterness.

"What I recognise is that journalism is a very dangerous and risky profession when done properly. I think of journalists in Mexico, in Colombia, in India. I think of journalists in many countries, in Egypt and many other places that have risked all to tell the truth about corruption, risked all to make sure the rest of the world knows the truth of what's been done in their name.

"Julian Assange to me walks in that great tradition of great, fearless journalists. We're here to support Julian Assange and demand his freedom. And we'll be here as many times as it takes to continue making that call.

"Thank you everyone today for standing up for the truth."[7]

A Quote by Richard Medhurst