On 30 June 2018, two British nationals, 45-year-old Charlie Rowley and 44-year-old Dawn Sturgess, were admitted to hospital both in a critical condition after being found unconscious at a property in Amesbury, near the English town of Salisbury.

Police stated Rowley and Sturgess, both habital drug users,[2][3] were poisoned by novichok, an exotic nerve agent of the same kind used in the poisoning of ex-Russian spy Sergei Skripal and his daughter Yulia Skripal in the city of Salisbury, 8 miles (13 km) away.[4][5][6] 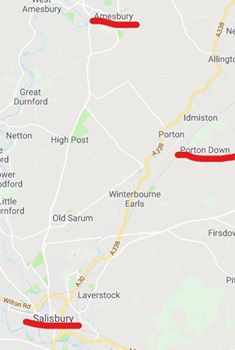 Amesbury, Porton Down and Salisbury

On 8 July 2018, the Metropolitan Police announced that Sturgess had died following her exposure to the nerve agent and that Scotland Yard were launching a murder inquiry.[7][8]

According to British police, Charlie Rowley, found the a sealed perfume bottle in a charity bin[9]. He also came into contact with the poison, was hospitalized, but survived.

The hospital said that it would not talk about individual cases: “To reiterate what we have said previously, we are not currently treating anyone for nerve agent-related illnesses.”

Rowley said previously that the Novichok which poisoned him and Sturgess had been contained in a perfume bottle which he had found. He was not able to tell police where he found it.[10] 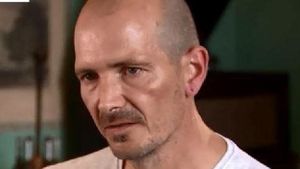 Charlie Rowley, recovered from being poisoned in Amesbury

Skripal suspects "not wanted for murder"

"The most dreadful thing about the whole saga is the death of poor Dawn Sturgess, and the most singular fact at present is that Ruslan Boshirov and Alexander Petrov are only wanted in relation to the “attack on the Skripals”. There is no allegation against them by Scotland Yard or the Crown Prosecution Service over the far more serious matter of the death of Sturgess. That is a fascinating fact, massively under-reported."[11]

We are continually presented with experts by the mainstream media who will validate whatever miraculous property of “novichok” is needed to fit in with the government’s latest wild anti-Russian story. Tonight Newsnight wheeled out a chemical weapons expert to tell us that “novichok” is “extremely persistent” and therefore that used to attack the Skripals could still be lurking potent on a bush in a park.

Yet only three months ago we had this example of scores from the MSM giving the same message which was the government line at that time:

“Professor Robert Stockman, of the University of Nottingham, said traces of nerve agents did not linger. He added: ‘These agents react with water to degrade, including moisture in the air, and so in the UK they would have a very limited lifetime. This is presumably why the street in Salisbury was being hosed down as a precaution – it would effectively destroy the agent.'”

In fact, rain affecting the “novichok” on the door handle was given as the reason that the Skripals were not killed. But now the properties of the agent have to fit a new narrative, so they transmute again.

It keeps happening. Do you remember when Novichok was the most deadly of substances, many times more powerful than VX or Sarin, and causing death in seconds? But then, when that needed to be altered to fit the government’s Skripal story, they found scientists to explain that actually no, it was pretty slow acting, absorbed gradually through the skin, and not all that deadly.

Scientists are an interesting bunch. More than willing to ascribe whatever properties fit the government’s ever more implausible stories, in exchange for an MSM appearance fee, 5 minutes of fame and the fond hope of a research grant.

According to the Daily Telegraph today, the unfortunate Charlie Rowley is a registered heroin addict, and if true Occam’s Razor would indicate that is a rather more likely reason for his present state than an inexplicably persistent weaponised nerve agent.

If it is however true that two separate attacks have been carried out with “novichok” a few miles either side of Porton Down, where “novichok” is synthesised and stored for “testing purposes”, what does Occam’s razor suggest is the source of the nerve agent? A question not one MSM journalist seems to have asked themselves tonight.

I am slightly puzzled by the picture the media are trying to paint of Charlie Rowley and Dawn Sturgess as homeless, unemployed addicts. The Guardian and Sky News both state that they were unemployed, yet Charlie was living in a very new house in Muggleton Road, Amesbury, which is pretty expensive. According to Zoopla homes range up to £430,000 and the cheapest ones are £270,000. They are all new build, on a new estate, which is still under construction.

Both Charlie Rowley and Dawn Sturgess still have active Facebook pages and one of Charlie’s handful of “Likes” is a mortgage broker, which is consistent with his brand new house. They don’t give mortgages to unemployed heroin addicts, and not many of those live in smart new “executive housing” estates. Both Charlie and Dawn appear from their Facebook pages to be very well socialised, with Dawn having many friends in the teaching profession. Even if she has been homeless for a period as reported, she is plainly very much part of the community.

Naturally, there is no mention in all the reports today of MI6’s Pablo Miller, who remains the subject of a D notice. I wonder if he knows Rowley and Sturgess, living in the same community? It should be recalled that Salisbury may be a city, but its population is only 45,000.

The most important thing is of course that Charlie and Dawn recover. But tonight, even at this early stage, as with the entire Skripal saga, the message the security services are seeking to give out does not add up. Mark Urban’s piece for Newsnight tonight was simply disgusting; it did not even pretend to be more than a propaganda piece on behalf of the security services, who had told Urban (as he said) that Yulia Skripal’s phone “could have been” tapped by the Russians and they “might even” have listened to her conversations through the microphone in her telephone. That was the “new evidence” that the Russians were behind everything.

As a former British Ambassador I can tell you with certainty that indeed the Russians might have tapped Yulia, but GCHQ most definitely would have. It is, after all, their job, and billions of our taxes go into it. If tapping of phones is seriously presented as evidence of intent to murder, the British government must be very murderous indeed.[12]

Britain's Defence Secretary, Gavin Williamson, has said that a Russian "attack" led to the death of a mother of three who was exposed to the same nerve agent that put former spy Sergei Skripal and his daughter in the hospital, while the Kremlin said it would be "absurd" to blame Moscow.[13]

The conflicting comments on July 9 came as more details emerged about the death of Dawn Sturgess, 44, in southern England a day earlier following what police say was an unexplained exposure to the nerve agent Novichok:

"The simple reality is that Russia has committed an attack on British soil which has seen the death of a British citizen," Williamson said when asked in parliament about the threat facing people in Britain.
"That is something that I think the world will unite with us in actually condemning," Williamson said.

Williamson spoke hours after Russian President Vladimir Putin's spokesman, Dmitry Peskov, said that the Kremlin believes "it would be quite absurd" to blame Russia for the poisoning of Sturgess.

Peskov's remarks were in line with repeated Kremlin denials of Russian involvement in the March poisoning of Sergei and Yulia Skripal with Novichok in the southern English city of Salisbury.[14]

This page imported content from Wikipedia on 9 July 2018.
Wikipedia is not affiliated with Wikispooks.   Original page source here
Retrieved from "https://wikispooks.com/w/index.php?title=2018_Amesbury_poisonings&oldid=190706"
Categories: