Document:Metropolitan Police on 'Chepiga' and 'Mishkin' 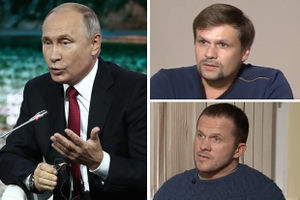 I have just received confirmation from the Metropolitan Police Press Bureau that both the European Arrest Warrant and Interpol Red Notice remain in the names of Boshirov and Petrov, with the caveat that both are probably aliases. Nothing has been issued in the name of Chepiga or Mishkin.

As for Bellingcat’s “conclusive and definitive evidence”, Scotland Yard repeated to me this afternoon that their earlier statement on Bellingcat’s allegations remains in force:

“We are not going to comment on speculation about their identities.”

It is now a near certainty that Boshirov and Petrov are indeed fake identities. If the two were real people, it is inconceivable that by now their identities would not have been fully established with details of their history, lives, family and milieu. I do not apologise for exercising all due caution, rather than enthusiasm, about a narrative promoted to increase international tension with Russia, but am now convinced Petrov and Boshirov were not who they claimed.

But that is not to say that the information provided by NATO Photoshoppers "R" Us (Ukraine Branch) on alternative identities is genuine, either. I maintain the same rational scepticism exhibited by Scotland Yard on this, and it is a shame that the mainstream media neither does that, nor fairly reflects Scotland Yard’s position in their reporting.

Still less do I accept the British government’s narrative of the Novichok poisoning, which remains full of wild surmise and apparent contradiction. No doubt further evidence will gradually emerge. The most dreadful thing about the whole saga is the death of poor Dawn Sturgess, and the most singular fact at present is that Boshirov and Petrov are only wanted in relation to the “attack on the Skripals”. There is no allegation against them by Scotland Yard or the Crown Prosecution Service over the far more serious matter of the death of Sturgess. That is a fascinating fact, massively under-reported.

I remain of the view that the best way forward would be for Putin to negotiate conditions under which Boshirov and Petrov might voluntarily come to the UK for trial. The conditions which I would suggest Russia propose are these:

I strongly suspect that, if a trial would bring to public light something of the extent of the convoluted spy games that were being played out in Salisbury, we would find the British Government’s pretended thirst for justice would suddenly slam into reverse.

Sadly, it currently seems highly improbable that either justice will be served or the full truth be known.

"When US Special Counsel Robert Mueller laid the indictment against the 13 so called Russian hackers, the lawyer for one of them turned up in a New York Court requesting a trial date AND disclosure.

"Oddly Mueller decided NOT to proceed, and the whole matter was never reported in the mainstream media.

"Under disclosure rules protected by the constitution, a defendant must be provided with the evidence against them - problem for Mueller is that he has no evidence, just a PR stunt indictment.

"The Brits would be faced with the same dilemma - they would be forced to produce their cooked up evidence in court, which would no doubt blow their cock and bull story out of the water."[2]