Hamish de Bretton-Gordon ran a company called SecureBio with, we read on this ‘military speakers’ website, ‘an impressive list of blue chip clients globally.’ However, Companies House says SecureBio resolved to go into liquidation in June 2015. The Colonel now apparently works for a company which makes breathing masks, Avon Protection.[2] His LinkedIn profile claims he is ‘Managing Director CBRN’ of Avon, despite not actually being a director. He also claims still to be director of SecureBio. He does not mention that company was dissolved in August 2017 with debts over £715,000.[3]

In a February 2016 video interview, Hamish de Bretton-Gordon said he was running 32 hospitals and clinics across Syria in territory controlled by ISIS, and where the White Helmets were operating.[4]

In December 2017, Hamish de Bretton-Gordon and fellow director David Nott of "Doctors Under Fire" highlighted the case of seven children with curable cancer who were said to be dying in Ghouta, Syria, for want of drugs and nourishment. They claimed Union of Syrian Medical Care and Relief Organisations (UOSSM) hospitals in Ghouta were on their knees with very few medicines left, and that kind words for the dying children were the only palliative care available.[6]

This astonishing video collated all the times the "last hospital" in eastern Aleppo was put out of action by "Syrian regime airstrikes". Can you guess how many it was? And how do the mainstream media source their footage of sick children, hospitals, and dare we add, "Doctors Under Fire"? They are entirely dependent on the terrorists. No western journalist can venture into their areas. Why? For fear of being kidnapped and held for ransom by the very people they champion.

De Bretton-Gordon also claimed on the BBC a hospital in eastern Ghouta had been hit. That was why they gave him a platform under his "Doctors Under Fire" persona. But again, it was second-hand terrorist propaganda. Here, the impressive Off-Guardian website exposes the Syrian totem head of the White Helmets, which is a British Foreign Office creation. This relentless tugging at western heart-strings is a scam and the corporate media know it.[7]

On 4 March 2018, a Russian double agent Sergei Skripal was reported to have been poisoned in Salisbury with a nerve agent which British authorities identified as Novichok. Theresa May told Parliament that she held Russia responsible for Skripal's attempted murder. According to Hamish de Bretton-Gordon, Novichok was allegedly developed in the Soviet Union at a laboratory complex in Shikhany, in central Russia. Vil Mirzayanov, a Russian chemist involved in the development of Novichok, who later defected to the United States, said the Novichok was tested at Nukus, in Uzbekistan.[8]

Former British ambassador to Uzbekistan, Craig Murray, who visited the site at Nukus, said it had been dismantled with US help. He is among those advocating scepticism about the UK placing blame on Russia for the poisoning of Sergei Skripal. In a blog post, Murray wrote:

“The same people who assured you Saddam Hussein had WMDs now assure you Russian ‘Novichok’ nerve agents are being wielded by Vladimir Putin to attack people on British soil.”[9] 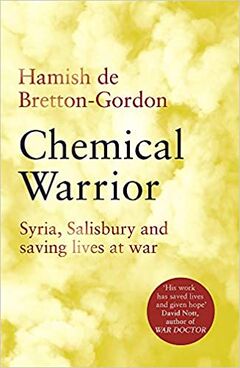 "Hamish has unearthed evidence of multiple chemical attacks in Syria"

"A sophisticated nerve agent was used at Douma, not just chlorine. Only Assad has the capability to produce these substances inside Syria. And using chemical weapons is his standard modus operandi."

These assertions were made before the arrival of an OPCW mission in Douma to investigate the alleged attack, which begs the question: "On what evidence are these categorical assertions based?"[10]

"If we're prepared to see 50-60 dead Syrian babies on our screen, then 'fine' .... military intervention is a last resort, but we're getting to last resort territory."[11]

"For thirty years, Hamish has served and volunteered in conflict zones around the world. As the army's foremost chemical weapons expert, he built a unique first-hand understanding of how to prevent attacks and train doctors on the frontline - saving countless lives in the process.

"After suffering near-death experiences time and again, Hamish discovered he had a ticking time bomb in his own chest: a heart condition called Sudden Death Syndrome that could kill him at any time. But with a new awareness for the fragility of life, he fought harder to make his count.

"Despite facing extraordinary personal danger, Hamish has unearthed evidence of multiple chemical attacks in Syria and continues to advise the government at the highest level, including after the 2018 Novichok poisoning in Salisbury. Lifting the lid on Hamish's unique world of battlefield expertise and humanitarian work, "Chemical Warrior" is a thrilling story of bravery and compassion."[12]