Pablo Miller, also known as Antonio Alvarez de Hidalgo[2] is an MI6 agent.[3][4] He worked as first secretary at the Foreign and Commonwealth Office, was awarded the Order of the British Empire (OBE) in the Queen's Birthday Honours on 13 June 2015 "for service to British foreign policy".[5] 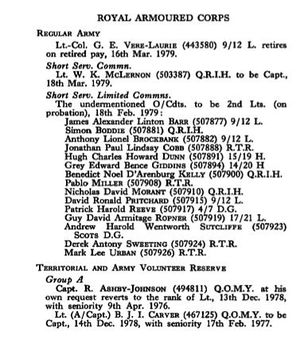 Pablo Miller was an officer in the Royal Tank Regiment together with Mark Urban, who also lived in Salisbury.

In the early 1990s Sergei Skripal was recruited by an MI6 agent Pablo Miller, whom the British media declined to name.[6] Miller was an MI6 agent in Tallinn, the capital of Estonia. Miller’s main task was recruiting Russians to provide information about their country to the British. An interesting fact, possibly coincidental, was that the MI6 officer under diplomatic cover in Moscow at this time was Christopher Steele. Steele was later to become better known as the principal author of the infamous Trump dossier.

When Steele returned to London, he ran MI6’s Russia desk between the 2006 and 2009. The information that Skripal disclosed would have been given to Steele, first in Moscow and later in London.

Pablo Miller is now working with a British security consultancy named Orbis Business Intelligence. Again according to the Telegraph, Miller’s association with this company has now been removed from Miller’s LinkedIn profile.

Orbis is the same private intelligence agency as that of Christopher Steele. It seems more than a mere coincidence that the same three men who had personal and professional links going back to the 1990s should have a continuing association at the same time as the Steele dossier was being compiled and later as the so-called Russiagate inquiry was imploding. Former FBI Director James Comey described the Steele dossier as “salacious and unverified” in a Senate hearing.[7]

On both 7th and 14th of March 2018, the DSMA Secretary issued a DSMA-Notice to try to prevent commercially-controlled media from publishing Miller's name in connection with the Skripal Affair.[8]

Miller's name and alias were published online in Russian in 2007.[2]

Miller's name was connected to the Skripal Affair by Craig Murray, who published about the DSMA-Notices.[9]

His name and email were on a mailing list from the Integrity Initiative that was leaked online in 2018.[10][11]