Since 1 November 2016, Professor Nils Melzer has been serving as the United Nations Special Rapporteur on Torture and other Cruel, Inhuman or Degrading Treatment or Punishment.

On 31 May 2019, Professor Melzer condemned the "collective persecution" of Julian Assange:

“In the course of the past nine years, Mr Assange has been exposed to persistent, progressively severe abuse ranging from systematic judicial persecution and arbitrary confinement in the Ecuadorian embassy, to his oppressive isolation, harassment and surveillance inside the embassy, and from deliberate collective ridicule, insults and humiliation, to open instigation of violence and even repeated calls for his assassination.

“In 20 years of work with victims of war, violence and political persecution I have never seen a group of democratic States ganging up to deliberately isolate, demonise and abuse a single individual for such a long time and with so little regard for human dignity and the rule of law. The collective persecution of Julian Assange must end here and now!”[1]

In 2022, Melzer's book "The Trial of Julian Assange: A Story of Persecution" was published in the UK by Verso. Synopsis:

In July 2010, Wikileaks published Cablegate, one of the biggest leaks in the history of the US military, including evidence for war crimes and torture. In the aftermath Julian Assange, the founder and spokesman of Wikileaks, found himself at the centre of a media storm, accused of hacking and later sexual assault.

He spent the next seven years in asylum in the Ecuadorian embassy in London, fearful that he would be extradited to Sweden to face the accusations of assault and then sent to US. In 2019, Assange was handed over to the British police and, on the same day, the US demanded his extradition. They threatened him with up to 175 years in prison for alleged espionage and computer fraud.

At this point, Nils Melzer, UN Special Rapporteur on Torture, started his investigation into how the US and UK governments were working together to ensure a conviction. His findings are explosive, revealing that Assange has faced grave and systematic due process violations, judicial bias, collusion and manipulated evidence. He has been the victim of constant surveillance, defamation and threats.

In the 1980s, Peter Wright's book "Spycatcher" was published first in Australia. Its allegations proved scandalous on publication, but more so because the British Government attempted to ban it, ensuring its profit and notoriety.[3]

In an apparent inversion of the position with "Spycatcher", Nils Melzer tweeted on 6 August 2022: 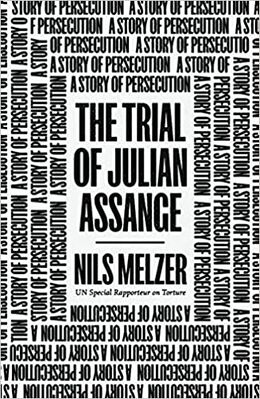 Book deemed to be "protest material"

Worrying news in @guardian suggesting that my book "The Trial of Julian Assange: A Story of Persecution“ has been #blacklisted by Australian authorities.[4]

Security staff at Parliament House in Canberra seized copies of a book about Julian Assange from his family members as they entered the building to meet MPs on Thursday, deeming it “protest material”.

Assange’s family and supporters visited parliament on Thursday to urge the Albanese government to intervene in the proposed extradition of the WikiLeaks founder from the UK to the United States.

They were carrying copies of a book on Assange’s case by Nils Melzer, the former United Nations special rapporteur on torture, which they intended to give to MPs and media.

But Assange’s brother, Gabriel Shipton, said parliament security refused to let the family take the book into the building, because they deemed it to be “protest material”.[5]

Nils Melzer has previously served for 12 years with the International Committee of the Red Cross (ICRC) as Delegate, Deputy Head of Delegation and Legal Adviser in various zones of conflict and violence.

After leaving the ICRC, Nils Melzer held academic positions as Research Director of the Swiss Competence Centre on Human Rights (University of Zürich), as Senior Fellow and Senior Advisor on Emerging Security Challenges (Geneva Centre for Security Policy). He has was also Senior Adviser for Security Policy at the Political Directorate of the Swiss Federal Department of Foreign Affairs.

A Document by Nils Melzer

This page imported content from Wikipedia on 1 June 2019.
Wikipedia is not affiliated with Wikispooks.   Original page source here
Retrieved from "https://wikispooks.com/w/index.php?title=Nils_Melzer&oldid=250284"
Categories: