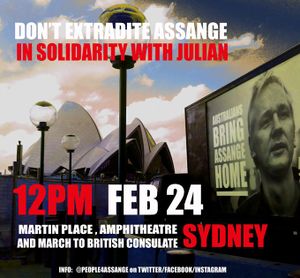 The moment that press freedom advocates have been waiting for so long has finally arrived.[1] The European institutions are starting to officially state that they don’t want Julian Assange to be extradited to the United States.

The Parliamentary Assembly of the Council of Europe (PACE) has become the first one to step in and call for Assange’s immediate release, joining the call of the United Nations Special Rapporteur on Torture, Nils Melzer, who some months ago clearly stated that Assange should walk free.

The call was made on the 28th of January 2020, when the PACE was debating on a resolution for the Member States included in a report on Threats to Media Freedom and Journalists’ Security in Europe.[2]

Drafted by the Labour member of the British House of Lords, George Foulkes, the document opens stating that the Council of Europe and its Assembly are firmly committed to strengthening media freedom in all its aspects, including the right to access to information, the safeguard of editorial independence and of 'the ability to investigate, criticise and contribute to public debate without fear of pressure or interference'.

Several amendments to the report were proposed inside the PACE Committee on Culture, Science, Education and Media, and Lord Foulkes, who is part of it, was happy to accept the one on Julian Assange.

“UK colleagues supported it because we don’t want to see him extradited by the UK Government to the United States and facing centuries in prison.”

The Council of Europe is the continent’s leading institution on human rights and includes 47 member states, 28 of which are also part of the European Union. What this Parliamentary Assembly, made up of members of national legislatures says about freedom of the press is something civil society should take notice of.

In this light, you would hope that the work of Wikileaks and his founder can hardly be forgotten. Or maybe it could — it seemed to be surprisingly off the agenda until some weeks ago, but January 2020 seems to have marked a change of course.[3]

The urgent alert on the Assange case quoted the statements made by UN Special Rapporteur on Torture Nils Melzer after visiting Assange in Belmarsh Prison in May 2019.

Following that urgent alert, on the 27th of January, an event sponsored by German Member of Parliament Andrej Hunko, was held at the Council of Europe on the risks represented by possible extradition of Assange for the freedom of the press.

After an intervention by Nils Melzer via videolink, the audience had the chance to listen to the General Secretary of the IFJ Anthony Bellanger.[4]

According to Mr Bellanger:

“The detention regime currently imposed on Assange appears to be unnecessary, disproportionate and discriminatory, and to perpetuate his exposure to psychological torture.”

Following Regis Brillat of the CPT (Executive Secretary of the European Committee for the Prevention of Torture), the discussion proceeded with Senator Gianni Marilotti, coordinator of the Italian Parliamentarian Intergroup for the Monitoring of Julian Assange case.

Given the unprecedented tough talk pronounced by some speakers against the guilty silence of some states on the persecution of an individual who can “only be accused of having disclosed real facts”, it is likely that this conference on Assange extradition risks has deeply influenced the development of the debate in the Assembly.

And, actually, there are some steps that happened behind the scenes.[5]

One of these is the drafting by Hunko of an amendment (different from the one finally approved, which was written later) signed also by his Italian colleague Marilotti and aiming to modify the Assembly’s Media Report in order for it to mention Wikileaks publisher.

It suggested to add the following words:

“...and defend the freedom media and security of journalists, namely in the case of Julian Assange as his possible extradition to the US would set a precedent and threaten journalists in all member states”.

Moreover, Hunko spoke with his British colleague author of the PACE Media Freedom Report, Lord Foulkes, highlighting the importance to add a clear reference to the case. The reply was positive and the discussion grew inside the Committee.

Then Hunko handed the ball to the Italian Senator Gianni Marilotti, whose words as a speaker of the conference on Assange’s extradition seemed to wake up many parliamentarians by highlighting the clash between the extradition and European democratic values.

"We believe it is important to highlight the fact that the unfair treatment and human rights violations that he is apparently facing are not compatible with the foundations of the European democracies, which gave themselves laws and principles related to the respect of the human being that are not negotiable."[6]

He went on by expressing a tough condemnation of the complicity shown by many states:

"We should be surprised and in a certain way outraged in front of the cautious silence kept by some states not only on Julian Assange’s situation but also on the facts revealed by him through Wikileaks work. The silence seemed to authorise or support the US and the United Kingdom’s behaviour in relation to an individual who is apparently deprived of the right to prepare his defence and deprived as well of his right to dignified psychophysical conditions."

Enhanced by Hunko’s event speakers, the debate continued in the Media Committee of the PACE, where a new amendment on Assange emerged, tabled by Mr Stefan Schennach and other members.

In this respect, consider that the detention and criminal prosecution of Mr Julian Assange sets a dangerous precedent for journalists, and join the recommendation of the UN Special Rapporteur on Torture and Other Cruel, Inhuman or Degrading Treatment or Punishment who declared, on 1 November 2019, that Mr Assange's extradition to the United States must be barred and that he must be promptly released.

Noticing that the second amendment was even stronger, Mr Hunko withdrew the one he had proposed.

Another member of the Italian Intergroup, Alvise Maniero, during the final vote expressed satisfaction for this choice:

“I hope my colleagues will show their courage by approving these amendments and its spirit, in that moment I will be able to joyfully approve the whole report on media freedom”, he stated.[7]

And, since the Assembly finally approved a unanimous call for the release of the Wikileaks publisher, the patient work of Hunko and Marilotti has been rewarded.

“We have to stop being silent and to stop the one that seems to be a global warning according to which we don’t have the right to know the truth about the facts and not even the right to disclose it to the public.”

This time, we can say the Council of Europe joined them.

On 12 February 2020 at PMQs, Jeremy Corbyn called for the extradition of Julian Assange to the US to be halted, praising the Wikileaks founder for exposing US “war crimes”. On Mr Assange, who faces up to 175 years in a US jail if convicted, Mr Corbyn backed MPs on the Council of Europe who have warned the extradition “sets a dangerous precedent for journalists”.

The one-sided arrangements would be “laid bare” when the courts decide whether he should be sent to the US on “charges of espionage for exposure of war crimes, the murder of civilians and large-scale corruption”, he said.

“Will the prime minister agree with the parliamentary report that’s going to the Council of Europe that this extradition should be opposed and the rights of journalists and whistleblowers upheld for the good of all of us,” Mr Corbyn demanded.

“I’m not going to mention any individual cases but it’s obvious that the rights of journalists and whistleblowers should be upheld and this government will continue to do that.”

Mr Assange, who is being held in London’s Belmarsh Prison, has been indicted on 18 charges – 17 under the Espionage Act – for conspiracy to receive, obtain and disclose classified diplomatic and military documents.

Among Wikileaks’ revelations was video footage from a 2007 US Apache helicopter attack in Baghdad that killed at least nine men, including a Reuters news photographer and his driver.

The MPs’ report backs the recommendation of UN special rapporteur on torture Nils Melzer who called last year for the extradition to the US to be blocked.[9]