McGill counts among its alumni and faculty 12 Nobel laureates[2] and 147 Rhodes Scholars,[3] both the most of any university in Canada,[2] as well as 16 billionaires, the current prime minister and two former prime ministers of Canada, two Governors General of Canada, 15 justices of the Supreme Court of Canada, at least eight foreign leaders, and more than 100 members of national legislatures. McGill alumni also include 8 Academy Award winners, at least 13 Emmy Award winners, four Pulitzer Prize winners, and 121 Olympians with over 35 Olympic medals.[4] 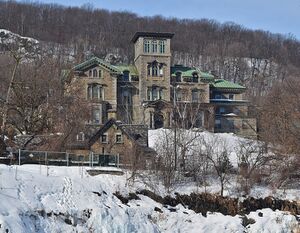 The Allan Memorial Institute, which housed the psychiatric department of the Royal Victoria Hospital, and was affiliated with McGill University.

The McGill University AIDS Centrer resides at the Lady Davis Institute at the Jewish General Hospital. Mark Wainberg, the Director of the AIDS Centre, was among the first to test the drug 3TC (Lamivudine; sold by GlaxoSmithKline) in patients stated to be with HIV. From 1998 to 2000, Wainberg served as President of the International AIDS Society, the world’s largest organization of AIDS researchers and clinicians. Wainberg was very active in trying to spread the use of AIDS-drugs in Africa and developing countries.[7][8] Wainberg called for Dr. Peter Duesberg and others who “attempt to dispel the notion that HIV is the cause of AIDS,” to be “brought up on trial,” calling such people, “perpetrators of death,” stating that he "hoped the US Constitution could be re-written to accommodate such arrests."[9] Wainberg has reported receiving grants for research and serving as a speaker for GlaxoSmithKline, Bristol-Myers Squibb, and Abbott Laboratories, and has also served as a speaker for Gilead Pharmaceuticals.[10][11]