Jason Walters is an Dutch-American convicted "terrorist".[1] Born as son of an American soldier and Dutch mother, Walters became known as member of the infamous Hofstadgroup, the biggest Dutch post-operation gladio "terrorist group". Walters and Ismail Akhnikh were arrested after a massive siege of their house in The Hague. During the siege in The Hague Walters threw a hand grenade at police officers, wounding 4. While imprisoned after being convicted for 15 years, Walters denounced his Muslim faith, and became a consultant and analyst on the topic of "radicalization" and "extremism". [2]

Neighbors of Walters stated that he was pro-America as a child.[3] After Walters his parents divorced, Walters became a Muslim in his early teens after growing up with a lot of Moroccan teens in the new city his father settled in. He rejected Christian teachings as he kept asking priests "what god wants from me", at which they only answered with "you need to find the answer in your heart, searching for it on your own". Walters requested more concrete answers recalling his "existential struggle". The "simple, hardline framework" suited Walters better, Walters even radicalized faster than his brother Jermaine. Walters started watching Al Qaeda lectures online and found Samir Azzouz on the internet who helped him travelling to a Pakistani fighting-camp preparation to join the Taliban in Afghanistan being inspired by the 1980s Afghan war, having felt made to "choose" after seeing 9-11 on TV.[4]

Walters according to his own stories got questioned on his return by the AIVD, but they let them go when he kept maintaining a story of only being there for "humanitarian purposes". Walters adopted the name Abu Mujahied Amrik. His mother, getting the gist of his development, fled with her daughters to a women's shelter and his talk about jihad against the non-believers caused his mosque to ban him and his brother, Jermaine Walters, and notify the authorities.

According to the official narrative Walters and Ismail Akhnikh were arrested after a massive siege of their house in The Hague. During the siege in The Hague Walters threw a hand grenade at police officers, wounding 4. The AIVD instigated the siege after the assassination of film-maker Theo van Gogh by fellow Hofstad Network member Mohammed Bouyeri. A largely unanswered question remains how this group got in the position to throw hand grenades, murder a popular film-maker and be in contact with several other networks as the main house of gatherings was organized by another member of the group who was a suspected informant of the AIVD[5] who had the house bugged from the top to bottom.[6] 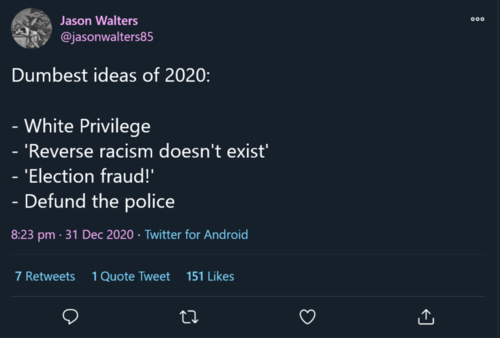 A typical Jason Walters Twitter post. In support of the status quo and current governments in good faith.

According to the AIVD, Walters planned to murder Dutch political figures including Geert Wilders. He got the longest sentence of all Hofstad Group members bar Bouyeri with 15 years. The siege, trial[7][8] of the dozens of members, and plans unravelled caused massive shock and influenced Dutch policy regarding Islam massively. Multiple MPs were placed into safehouses, and Geert Wilders has been in several ever since. The group permanently gave Islam and their followers the leading face as enemy image, especially after 9-11 and the murder of Pim Fortuyn a year later. Not surprisingly the Dutch joined the Iraq War and Afghan war later on, although denied until parliamentary enquiries proved otherwise in 2010.[9]

“It takes two to polarize. The US serves as vivid case study of how polarization dynamics work. It would be advisable to pay close attention, learn lessons so we can prevent ever getting in to a similar situation ourselves.”
Jason Walters [10]

Walters was released in 2013. In 2018, he said to have de-radicalized in prison by reading works of Nietzsche and Plato, calling radicalization an existential decision.[11] Walters moved back to The Hague and became a "terror expert" working for a private security group headed by a former MiVD and NEFA Foundation chief after attaining a degree from the University of Leiden. In the role of academic Walters has become an advocate for a meritocratic world, making specific essays denouncing the polarizing perspective, but always in favour of the status quo of the current governments.[12]

“Periodic reminder: apart from extreme-left "woke" identity-politics being outright demonic on its own, a side-effect is that its creates an ideal breeding ground for the exploitation of right-extremism.”
Jason Walters [13]

Walters and his group enjoyed an outstanding amount of interviews on Dutch TV[14], newspapers and the internet, even well into the 2010s creating a strategy of tension for the war on terror indicating it wasn't that dangerous for governments... or in fact it's "under control" in some gradation. Particularly his support for Israel and their policies for achieving a home state, and his publications even 10 years after his conviction seem suspicious with publications from Israel to The Hague and even podcasts and his own movie (fascinatingly called The Good Terrorist") on Dutch state-TV.[15][16] Whether the Hofstadgroup - filling the roles of former gladio groups in eerie similarity - is a part of Quia Oportet was not discussed in commercially controlled media.