Henrietta H. Holsman Fore is an American public health and international development executive who serves as the executive director of UNICEF. Fore formerly served as chairman of the board and chief executive officer of Holsman International, a manufacturing and investment company. Fore was the first woman Administrator of the United States Agency for International Development (USAID) and Director of U.S. Foreign Assistance, 37th Director of the United States Mint in the U.S. Department of Treasury. She was the Presidential Appointee for President George H. W. Bush at the U.S. Agency for International Development.

Fore was born in Chicago, Illinois.[1] Her mother was from Switzerland. Her father served the military during World War I.[2]

In 1966, Fore graduated from The Baldwin School, a private girls boarding school in Bryn Mawr, Pennsylvania. In 1970, Fore received a B.A. in history, economics, and art from Wellesley College.[2] In 1975, she received a M.S. in public administration from the University of Northern Colorado.[3] In 1986, she studied international politics at the University of Oxford.

After college, Fore worked in the federal government. She then worked at one of her father's companies, a small manufacturing business in the steel industry, a position she held for 12 years.[2] From 1977 to 1989, she was president and director of Stockton Wire Products in Burbank, California. From 1981 to 1989, she was president and the chairman of the board of Pozacorp, Inc. in Burbank, California.[4] 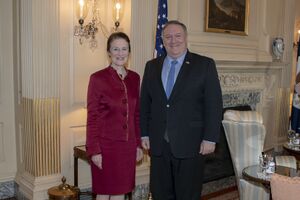 From 2005 to 2007, Fore served as Under Secretary of State for Management, the Chief Operating Officer for the United States Department of State.[6]

From May 2007 to January 2009, Fore served as the 13th Administrator of the U.S. Agency for International Development (USAID),[4] and Director of United States Foreign Assistance, holding the equivalent rank as Deputy Secretary of State.

In January 2018, Fore was hired as the executive director of UNICEF.[7] As part of this position, Fore has worked in collaboration with GAVI, Coalition for Epidemic Preparedness Innovations (CEPI), and the World Health Organization, among others, to facilitate vaccination to combat the COVID-19 global pandemic.[2]

Fore got married during her senior year of college. She and her husband moved to Denver, Colorado.[2] She is married to Richard L. Fore, who has four children.

She is a Republican.

This page imported content from Wikipedia on 01.01.2022.
Wikipedia is not affiliated with Wikispooks.   Original page source here
Retrieved from "https://wikispooks.com/w/index.php?title=Henrietta_Fore&oldid=234593"
Categories: