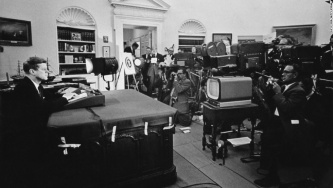 John F. Kennedy did not get much credit for resolving his from his hawkish Pentagon advisors, who considered that he has missed an opportunity for a preemptive all out attack on the USSR.

On the day when JFK resolved the Crisis, he told his brother, RFK, "this is the night I should go to the theatre", referring to the Lincoln assassination. His brother replied "if you go, I want to go with you".[1]

He began to understand just how insecure was his position as president.[2]