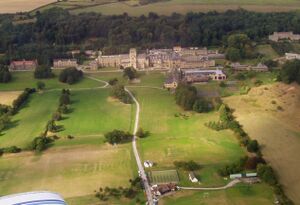 Ampleforth from the air

Ampleforth College is a co-educational independent day and boarding school in the village of Ampleforth, North Yorkshire, England.[1] Opened in 1802 as a boys' school, the college is now fully co-educational, and run by the Benedictine monks at Ampleforth Abbey.

Ampleforth was banned from accepting new students after a decades of abuse from paedophiles teachers were exposed. Ampleforth is also affiliated preparatory school, St Martin's Ampleforth, which lay across the valley at Gilling Castle, which closed in 2020 after similar incidents were exposed.

Initially several monks and three members of the lay teaching staff were accused of molesting children in their care over a period of several decades. In 2005 Father Piers Grant-Ferris admitted 20 incidents of child abuse. The Yorkshire Post reported in 2005: "Pupils at a leading Roman Catholic school suffered decades of abuse from at least six paedophiles following a decision by former Abbot Basil Hume [later a cardinal, and Archbishop of Westminster] not to call in police at the beginning of the scandal."[2][3] Following the case the Abbot, Cuthbert Madden, offered a "heartfelt apology" to the victims of one member of staff.[4]

The College thereafter put in place a safeguarding policy, subsequently judged inadequate (see below), but which was said to follow the local inter-agency procedures of the North Yorkshire Safeguarding Children Board and the guidance given in the Education (Independent School Standards) (England) Regulations 2010 and the National Minimum Standards for Boarding Schools.[5] In accordance with this policy, in 2016 Fr Madden temporarily stepped down from his role of Chairman of Governors during the investigation of indecent assault allegations made by four former pupils.[6] Based on the evidence available no further police action was taken, however the English Benedictine Congregation refused to allow him to resume his role.[7][8]

In April 2018 the Charity Commission appointed a lawyer to take charge of safeguarding at Ampleforth College, as it was not satisfied that the trustees of the charities that run the college had made enough progress in improving pupil safeguarding.

The Independent Inquiry into Child Sexual Abuse (IICSA) investigated the English Benedictine Congregation, including Ampleforth College and Downside School, amongst other institutions, and published a report in August 2018.[9] Ten individuals from the two schools, including monks, were convicted or accepted a caution for abuse. The report said that abuse was inflicted on pupils over 40 years, but the schools tried to cover up allegations. The Chair of the Inquiry, Prof. Alexis Jay, said that the schools for decades tried to avoid giving any information to police or authorities, with monks being "secretive, evasive and suspicious of anyone outside the English Benedictine Congregation", prioritising "the reputation of the Church and the wellbeing of the abusive monks" over safeguarding. New procedures were introduced in 2001 following the Nolan Report, recommending that abuse should be referred to the statutory authorities, however allegations continued to be handled internally.[10][11] The Department for Education released a report in November 2020 following an inspection, claiming that the school in some respects appeared to have relapsed in the year since the change of leadership. The school was forbidden from admitting new pupils. The school responded that it had taken "very considerable steps forward" and put in place "a robust safeguarding regime, a new senior leadership team, and a new governance structure that has effectively separated the abbey from the college", and said that it intended to appeal the decision.[12]

The admissions ban, due to come in place on 29 December, was since delayed. In his first interview on the matter, headmaster Robin Dyer stated in December 2020 that there was "no evidence expressed in the report" of any instances "to do with emergencies [or] to do with harm to children". Arguing that the Ofsted report was "less than complete" and had little to do with his tenure as headmaster, he requested that a new inspection be conducted in January.[13]

Following a further Ofsted inspection, in April 2020 the admissions ban was lifted by the Secretary of State for Education, Gavin Williamson. Inspectors reported that they were satisfied with Ampleforth's progress, and the Department for Education signed off on the schools safeguarding action plan.[14] An Ofsted inspection at the end of 2021 according to the Social care common inspection framework found that safeguarding was ineffective, rating the school "Inadequate" for Overall experiences and progress of children and young people; How well children and young people are helped and protected; and The effectiveness of leaders and managers. The school did not meet several of the national minimum standards for boarding in schools, and needed to attain compliance with the standards.[15][16]

In September 2005, Ampleforth was one of fifty of the country's leading independent schools which were found by the Office of Fair Trading to be operating a fee-fixing cartel in breach of the Competition Act of 1998. All of the schools were ordered to abandon this practice, pay a nominal penalty of £10,000 each (with minor exceptions) and make ex-gratia payments totalling three million pounds into a trust designed to benefit pupils who attended the schools during the period in respect of which fee information was shared.[17][18] Mrs Jean Scott, the head of the Independent Schools Council, said that they were unaware that the law had changed, and that private schools had not known that they had become subject to competition law.[19]