John Lennon was a world famous musician turned peace activist, who openly criticized theruling class. His charisma and egalitarian sentiments increasingly inspired hostility from the US deep state. After opposition by the US MICC, he was assassinated in New York in 1980, an attack officially attributed to a "lone nut".

In 1971, shortly after Lennon went to New York on a visa and met up with peace activists, the FBI put Lennon under surveillance, and the US Immigration and Naturalization Service tried to deport him a year later.[3] As of 2018, not all the FBI files on him have been released. [4]

The US deep state perceived Lennon's outspoken opinions and his massive popularity as a threat. He was the subject of a four-year campaign of surveillance and harassment by the US government (spearheaded by FBI Director J. Edgar Hoover), an attempt by Richard Nixon to have him “neutralized” and deported.[5]

“The people have the power, all we have to do is awaken that power in the people. The people are unaware. They’re not educated to realize that they have power. The system is so geared that everyone believes the government will fix everything. We are the government.”
John Lennon [6] 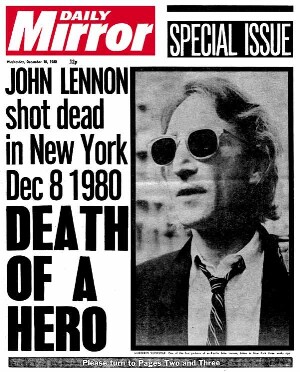 On 8 December 1980 John Lennon was hit by 5 hollow point bullets outside the New York hotel in which he was living, The Dakota. The official narrative states that the hotel's doorman was Jose Sanjenis Perdomo - an organiser of Operation 40, the CIA-backed hit squad which was also implicated in the JFK assassination). Perdomo's name was not disclosed to the commercially-controlled media for some years, but the crime was attributed to an MKUltra "lone nut", Mark Chapman.[7]