Richard Peter Moore is a British intelligence official, currently the Chief of the Secret Intelligence Service (MI6) and formerly the Director General (Political) at the Foreign, Commonwealth & Development Office,[1][2][3][4] and previously the British Ambassador to Turkey.[1]

"In the contest for power through the 21st century, those who command key technologies will have an advantage," says Richard Moore.

On 30 November 2021 Richard Moore, known to spies as 'C' and who oversees the UK’s foreign intelligence apparatus, told BBC Radio 4’s Today Programme that while he believed that free societies possessed an advantage over authoritarian ones, “we need to be very robust in fighting our corner” and leverage “the entrepreneurial animal spirits” within science and techonology to keep pace with Beijing.

Moore said Britain had observed China using loans and debt to “acquire significant ports that have the potential to become naval facilities”, doing by economic means what nations including the UK and US had done in the past by force.

But he added that data and technology now provided a comparable avenue for Xi Jinping’s government to gain power. 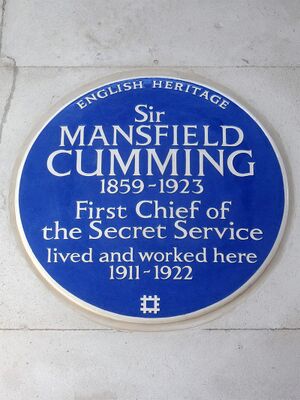 “If you allow another country to gain access to really critical data about your society, over time that will erode your sovereignty – you no longer have have control over that data. That’s something which I think in the UK we are very alive to and we’ve taken measures to defend against. It’s not true, I think, in all the conversations I have around the globe, but I’m very keen that people should understand that.”[5]

Moore said the green ink means those working in the service know any directive has been signed by him.

"The same is true of my typescript on my computer," the latest 'C' added.[6]

Later, on the same day as his Today Programme interview, Richard Moore made his first public speech at the International Institute for Strategic Studies as Chief of the SIS. In his speech entitled "Human intelligence in a digital age", Moore talked about the seismic changes he was seeing in the world, specifically in the espionage environment.

'C' discussed China, Russia and Iran, three of the ‘Big Four’ priorities for the intelligence world. He also explained what the UK is doing to address the fourth priority – the amorphous, shape shifting character of international terrorism.[7]