The Phoenix Program was a clandestine CIA research project into social control. Doug Valentine described it as “a highly bureaucratized system for dispensing with people who cannot be ideologically assimilated.” [1] It explored the utility of extreme violence for purposes of social control. The Vietnam War allowed the CIA to carry out systematic terrorisation of whole populations, using murder, torture and rape, developing expertise which they refined in Latin America in the 1970s before applying them in Mexico and increasingly in USA itself.[2] Researcher Douglas Valentine writes that it “set the stage for the "War on Terror"”.[3] It may have lead to, or intensified the serial killer phenomenon in the US in the years thereafter. 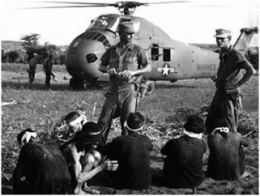