Social engineering can be seen as pre-emptive social control; if people are sufficiently well engineered to fit society, they will need minimal control. 21st century technology simultaneously offers huge potential to those who would engineer society and to those who would seek to resist such control.

The term sociale ingenieurs was introduced in an essay by the Dutch industrialist J. C. Van Marken in 1894. Wikipedia remarks that "extremely intensive social engineering campaigns occurred in countries with authoritarian governments" and focuses on USSR and China.

Echoing the information provided in schools and the other institutions of the commercially-controlled media, Wikipedia notes that "discussion of techniques of social engineering, particularly in advertising, is still quite pertinent in the western model of consumer capitalism" but has little else to say about the extensive social engineering that has been carried out in the "democracies" such as USA and UK. There is no discussion, for example, of the impact of television or schools.

In 2015 in the USA the pervasive climate of fear has lead adults to call the police after noting a 4-year-old playing alone at an outdoor playground 120 feet from his front door. When he refused to go home as he wasn't finished playing, neighbours called the police and his mother faces months in jail.[1]

Mass compulsion schooling was promoted from the late 19th century onwards and has served for over a century in many countries of the world as a highly effective instrument of social engineering, as ably documented by John Taylor Gatto. Ellwood Cubberly, editor of primary school text books, dean of teacher education at Stanford University established an "Education Trust". In 1906 he wrote that "in the new schools coming, children are to be shaped and fashioned like nails, and the specifications will come from business and government." In his History Of American Education, Cubberly casually mentions that childhood has been extended by 4 years.[2]

Ivan Illich named schooling as the reproductive organ of the consumer society.

The strategy of tension is a method of changing society, promoting fear and weakening popular resistance to make the general public more easily led. It emerged into public consciousness as Operation Gladio was exposed in Italy as the years of lead drew to a close. 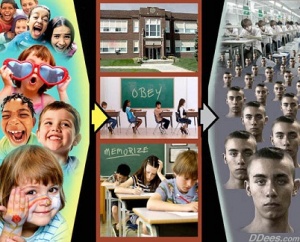