Trails from airplanes (condensation trails) in Europe and the United States, but presumably worldwide, since approximately the mid-2000s, are more persistent and do not disappear after half an hour or so. Some trails do disappear relatively fast, while others stay for prolonged periods, broaden over time, and build a milky cloud ceiling together with other trails that are left in proximity. This phenomena is unlike what many people remember from the 80s, and 90s, or earlier. At the same time, air traffic has increased manifold since the early 1980s.[1] The simple fact, however, that these trails are now way more visible and persistent than they used to be, has been noticed by some mainstream publications.[2][3]

Wikipedia's title (Chemtrail conspiracy theory) leaves no room for doubt, making clear that it considers chemtrails a pseudoscientific conspiracy theory. However Wikipedia's Solar radiation management[4] page (and others)[5] suggests, that this method is one possible candidate for climate engineering projects. A feasibility and cost analysis study for different methods of releasing particles into the atmosphere was done by the University of Calgary in 2010,[6] while studies that discuss the: 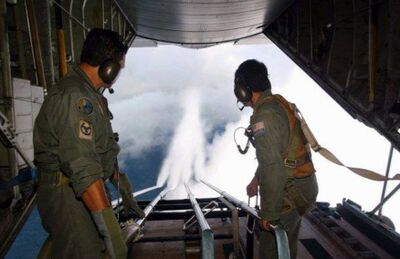 Known and documented US projects are:

A 2016 peer-reviewed paper concluded that "the evidence as evaluated here does not point to a secret atmospheric spraying program. Changes in aircraft technologies may be causing contrails to persist longer than they used to, and changes in industrial development could potentially be increasing aerosol deposition in some areas. But the focus on a secret, large-scale atmospheric spraying program may be taking attention away from real, underlying problems that need addressing."[9]

A speculative paper by the Air University at Maxwell Air Force Base from 2011 commented on a future in which satellite based, full motion video (FMV) from space has become common:[10]

Controlling the weather is a tactic that could counter the FMV sensors. For example, in a hypothetical 2035 scenario, China is preparing for a large-scale exercise in which it intends to test several new weapon systems. It doesn’t want the United States to observe events on the ground or in the air. To conceal the activity, China saturates the upper atmosphere with silver iodide crystals, forming a layer of cirrus clouds that effectively prevents, or significantly reduces, observation from space. This scenario is not farfetched. China leads the world in its efforts to control the weather. Bill Woodley, a scientist who ran several cloud-seeding experiments for the National Oceanic and Atmospheric Administration, calls China the “epicenter of all weather modification activity.” “They’re training young scientists and pilots; they’ve just gone crazy over there,” adds Woodley. He notes that Beijing employs 32,000 people nationwide in its Weather Modification Office and invests $100 million annually in the program.[11]

Since the earth is constantly watched by many satellites, military and civilian (even if only by high resolution pictures and not live video feed), this capability is something that any military of a certain size wants to have and thus, is most likely fully developed at present by the United States itself and some other countries. Neither the United States, nor any other country must have an open communication strategy with this. As with any other advanced weapons research, it is most certainly hidden from public oversight through classification and/or black budget financing. 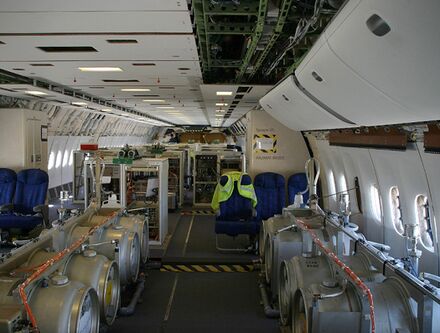 This is what some argue is a leaked picture from a plane specifically retrofitted for the purpose. A system like this, with tanks/barrels inside the cabin, could, as the Wikipedia article on Chemtrails points out, as well be used to simulate different points of gravity. The low volume of these barrels, compared to the overall cabin volume may indicate, that a configuration like this is not a cost effective solution to bring larger volumes of material into the atmosphere and thus, is used for a different purpose. 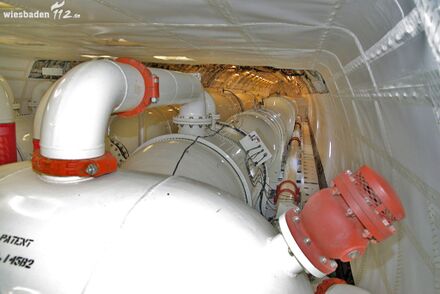 Another picture of a retrofitted plane for firefighting, the Evergreen Supertanker. This demonstrates that the technology is fairly well developed and high volume/cabin ratio is possible. - Thread at Metabunk that does explain several of the design/layouts that are known and used for various purposes. 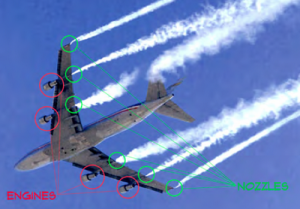 The term chemtrails is used to refer to a climate engineering concept scientifically named Stratospheric Aerosal Geoengineering. Chemtrails are much different than contrails that evoporate quickly in the sky. Chemtrails do not evaporate. Rather, planes that are fitted with special nozzles release aerosols in the sky that produce thick white lines similar to contrails. Multiple planes are deployed, flying parallel often seen in “checkerboard” patterns and the the sky is then covered with many grayish-white lines. The blue sky has vanished and has been replaced by a grayish-white toxic haze that blocks out and greatly diminishes the sunshine a process scientifically known as global dimming. Chemtrails can be seen as low as 18k feet while contrail formation is only supported at 37K feet according to Met office. High-bypass turbofan jet engines are less likely to create contrails because the ratio of air to exhaust is too high to facilitate the formation of condensation because the majority of air expelled from the back of the engine is not combusted. It passes through the fan and blown out the back without mixing with any fuel. Chemtrails have been independently tested and show high levels of barium, CHAFF, Strontium and other metals. These metals are dangerous to human health and could have adverse effects on the environment.[12][13]