The effects of COVID-19 on humans are a matter of ongoing intense study. It is generally very mild, but for the elderly and infirm it can be fatal, especially (it is suspected) in the case of a high initial dose.[1] Mainstream science (still) holds that containing it is a challenge because it can be asymptomatic but still infectious,[2] which is disputed by a study from China.[3]

COVID-19 has a very widely ranging rate of case fatality[4] which declined steadily as more testing was carried out. It is more fatal to men than women and to those with pre-existing health problems, especially lung complaints. It is more dangerous to the old rather than the young, possibly mainly due to co-morbities.[5] It may have have most impact on Asians.[6] Relatively few cases were initially reported in Africa.[7] It was reported in March 2020 to be more dangerous to those with blood type A.[8]

“There are now 50-some high-quality zero prevalence studies, says it has a 95% survival rate for people who are 70 and older. For people under 70, it's 99.95% survival. It's much less deadly for people who are under 70, 99.95. And for children, it's frankly, the flu is worse. We've had more flu deaths among children this year than COVID deaths, just in terms of mortality.”
Jay Bhattacharya [12]

Status of COVID-19 in the UK

After initial consideration, Covid-19 is not seen as a high consequence infectious disease (HCID) in the UK anymore (since the 19th March, 2020). The announcement reads in part:[13] "the public health bodies in the UK have reviewed the most up to date information about COVID-19 against the UK HCID criteria. They have determined that several features have now changed; in particular, more information is available about mortality rates (low overall), and there is now greater clinical awareness".

WHO Director-General Tedros Adhanom Ghebreyesus stated in a press briefing in March 2020 that "Globally, about 3.4% of reported COVID-19 cases have died," overlooking the bias towards reporting of symptomatic and serious cases. Craig Murray by contrast, noting the bias of hospital gathered statistics, estimated a rate of about "0.5%", comparable to the Hong Kong flu pandemic of 1968/9.[14] On 24 March the BBC wrote that "The UK government's scientific advisers believe that the chances of dying from a coronavirus infection are between 0.5% and 1%."[15] The Daily Mail suggested on 7 April 2020 that the fatality rate was about 2%.[16] A peer reviewed April 2020 study by Stanford University put the fatality rate at 0.14% or less.[17]

Numbers of infection and deaths from the WHO for 2019/2020 as reported by Ben Swann for Truth in Media on his Youtube channel on 2020-03-18.[18] The base from which the percentage for the fatality rate for the coronavirus is calculated, is the number of confirmed cases. Whereas for the seasonal flu it is the number of estimated cases. So the death rate for the seasonal flu is ~0.1%. If the flu were calculated like the coronavirus, per "confirmed cases" (meaning people actually seriously ill), the death rate would be around 10%.

In order to estimate how dangerous a virus is, the total number of people who got in contact with that virus has to be compared to the group of people who got ill from it. Instead of reporting this important ratio the commercially-controlled media reported as a "case" when someone was antibody positive (a measure if someone had contact with the virus). Therefore, the increasing number of tests carried out corresponded to and were reported as increasing number of cases. This is, obviously, fraud as several scientists and medical doctors have pointed out. [19][20][21][22] 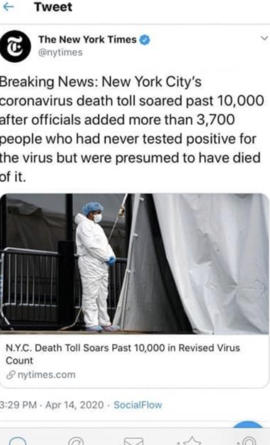 Cases of flu precipitously declined in comparison to 2019.[26] In March Prof Walter Ricciardi, scientific adviser to the Italian government, did relate: "The way in which we code deaths in our country is very generous in the sense that all the people who die in hospitals with the coronavirus are deemed to be dying of the coronavirus".[27] In Germany the president of the Robert Koch Institut confirmed on 20 March that the institution does the accounting in the same way.[28]

In late March / early April the United Kingdom and the United States have adopted policy that could lead to a higher number of deaths due to the coronavirus when under the same circumstances these deaths would not have been counted in such a way before.[29] The CDC announced that deaths would be counted as COVID-related without evidence if they were presumed to be so;[30] in its Guidance for Certifying Deaths Due to Coronavirus Disease 2019 from 03. April is advising that: "In cases where a definite diagnosis of COVID–19 cannot be made, but it is suspected or likely (e.g., the circumstances are compelling within a reasonable degree of certainty), it is acceptable to report COVID–19 on a death certificate as 'probable' or 'presumed'."[31]

The Californian physician Dr. Dan Erickson described his observations regarding Covid19 in a much-noticed press briefing.[32] Dr. Erickson reports that doctors from several US states have been „pressured“ to issue death certificates mentioning Covid19, even though they themselves did not agree.

A German laboratory stated in early April that according to WHO recommendations, Covid19 virus tests are now considered positive even if the specific target sequence of the Covid19 virus is negative and only the more general corona virus target sequence is positive. However, this can lead to other corona viruses (cold viruses) also trigger a false positive test result.[33]

The incubation period is 1-14 days, with a median of 5-6 days[34] Many infected people remain asymptomatic, of whom a limited number may have some ability to pass on the virus. Infection occurs through a similar mechanism to traditional influenza, i.e. generally inhalation, possibly also through touch or survival on surfaces. However, COVID is significantly more efficient at entering the lungs, so the virus has a greater R0 value, meaning it spread more readily. The infectious period was suspected to be about 14 days, but March 2020 research suggested it might be over one month.[35] The initial hope was that the virus might be sensitive to heat,[36] although as of late March 2020 the suspicion was that it was not — but that high humidity could reduce its rate of transmission.[37]

The clinical presentation is that of a respiratory infection with a symptom severity ranging from a mild common cold-like illness, to a severe viral pneumonia. It is nearly indistinguishable from influenza, which also typically causes pneumonia in the last days of life in the elderly. The common suggestion for diagnoses is "to get a PCR test". The use of these tests however is problematic[38][39][40] since they appear too be to sensitive (thereby giving too many false positives) and diagnosis relating to Covid-19 was for some time widely based on a positive or negative test result alone, without consideration for the "clinical presentation" of the patient.

The Australian government has released statements for health professionals on their website regarding PCR tests in March 2020:[41]

"The extent to which a positive PCR result correlates with the infectious state of an individual is still being determined."

"There is limited evidence available to assess the accuracy and clinical utility of available COVID-19 tests."

These statements still remain unchanged in September 2020,[42][43] so all the reporting about case rates is as unreliable as the tests are. Which tests are used and the and the current estimate of their reliability is never (or only on the rarest occasion) included in the reporting of the commercially-controlled media, or mentioned as a factor at all.

In August 2020 an appeals court in Portugal has ruled that the process is not a reliable and any PCR test using over 25 cycles can not be used as test for Sars-Cov-2.[44]

Celia Farber who knew and interviewed Kary Mullis the inventor of the Polymerase Chain Reaction (PCR) technology/test says, that Mullis did not agree that a PCR test can reliably be used as a diagnostic tool.[45][46] According to Torsten Engelbrecht and Konstantin Demeter (two German medical journalists) the intended use of the PCR method was to apply it as a manufacturing technique, being able to replicate DNA sequences millions of times and not as a diagnostic tool to detect viruses.[47] Declaring virus pandemics based on PCR tests can end badly as was described by Gina Kolata in her 2007 New York Times article Faith in Quick Test Leads to Epidemic That Wasn’t.[48]

2020 was peppered with reports about reinfection,[49][50] although this was uncertain, due to faulty testing.[51][52] Also uncertain was whether re-infection would be milder or more severe.[53][54]

Many drugs have been suggested to treat COVID-19.

Inadequate vitamin D may be linked to severe COVID-19.[55] If true, this has important consequences for the COVID-19/Lockdown.

Chloroquine[56], which showed efficacy against the disease in clinical trials in February[57] and March 2020.[58] On 28 April 2020 the Association of American Physicians and Surgeons stated that hydroxychloroquine had about a 90% chance of assisting in cases of COVID-19.[59] Access to these drugs was tightened and studies suggest that hydroxychloroquine was unsafe were published but later retracted.

The need for a high number of ventilators was discussed by end of February and fear of shortages was a part of the argument for a COVID Lockdown to reduce peak demand by "flattening the curve".[60] Later in March health professionals reported that patients in their care did not react well to this kind of treatment (manual ventilation by the device), rather were in some form deprived of oxygen but did not need help with breathing.[61][62] The wide use of the devices was reconsidered by beginning of April[63][64]

The Swiss Prof. Dr. med. Paul Robert Vogt published an article in early April, in which he highlighted the aspects that do let the coronavirus stand out from the seasonal flu:[65]

This situation was, however, not the norm and only very few isolated hotspots (northern Italy) appear to have been under this kind of duress. From there, with the neglect of the WHO to warn in a timely manner, some more problems arose, for example in France where more than 600 doctors went on to sue the government.[66]

The situation with the mentioned "mode of death" by Mr Vogt may be related to damage to the lungs by the ventilator, see "Treatment". Some hospitals face financial pressure since regular medical care has been ceased during the corona crisis.[67] Nurses and Doctors are sent to quarantine if they are test positive and many left for their home countries due to "come-home-stay-home-orders".

General bad practice as a policy has been reported in Britain's "Covid care homes" in October 2020.[68]

In mid 2020, a Youtube search for "corona empty hospitals" brought up many videos,[69] generally by the commercially-controlled media (indicating that this and related search terms are manipulated by the Youtube system and preference is given to reporting by established news sources), showing mixed results of hospitals that are under some kind of pressure and some that are not. At the same time citizens of the United States[70] and other countries[71][72] visited their local hospitals and recorded empty halls.

The real situation is obscured and likely exaggerated by media hype, which is confirmed by doctors who go public and report about their experience and that of their peers.[73] Videos uploaded by private individuals to their own Youtube channel, which are critical of the emergency situation, do however have an increased chance of being erased; even videos from smaller news channels that fall out of line are removed by Youtube. [74][75][76]

Like the (more deadly) SARS and MERS, severe Covid infections can cause permanent lung damage.[77][78] Other sequelae are reported, although the area remains poorly understood as of June 2020.[79][80]