From Wikispooks
(Redirected from Chloroquine)
Jump to navigation Jump to search

Hydroxychloroquine (abbreviated HCQ) is a drug on the WHO's List of Essential Medicines, the safest and most effective medicines needed in a health system. In 2017, it was the 128th most commonly prescribed medication in the US with more than five million prescriptions. In 2020 and 2021 it was widely used to treat COVID-19[1][2][3] with "incredible success"[4]. In an event termed "LancetGate", on 22 May 2020 the The Lancet published a study which highlighted risks of using the drug to treat COVID-19 only to retract it on the 5 June, an apparent part of a systematic campaign to undermine its usage.[5] The WHO also cancelled some trials of the drug, citing safety concerns.

Like Ivermectin, Hydroxychloroquine is a markedly cheap drug, compared to many other treatment methods that are approved and recommended by health authorities.

Compared to many drugs used to treat COVID-19 (Remdesivir in particular), HCQ is extremely cheap,[6] inviting speculation that a media smear campaign was undertaken by the pharmaceutical industry -- like with Ivermectin at the beginning of 2021 -- to impugn its safety. At the same time studies were set up that deliberately exceeded the known lethal dose for the drug.[7][8][9][10]

Hydroxychloroquine (HCQ) has been used worldwide to treat COVID-19.[1] and was found to significantly lower the disease's case fatality rate, especially when given early on.[11][12][13][14][15] Yale epidemiologist Harvey Risch has been an ardent supporter of its use, claiming that the drug is being suppressed by the commercially-controlled media and by Anthony Fauci.[16] Didier Raoult also recommended it's usage.[17] 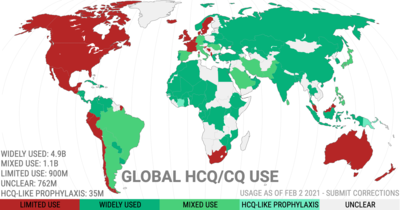 Map of HCQ use for treatment of COVID-19 worldwide. Widely used in most countries. Use is limited, however, in all 5 member-states of the Five Eyes intelligence alliance, along with a small handful of mostly Five Eyes-aligned nations.

Hydroxychloroquine has more than five million prescriptions per year.[citation needed] The treatment of COVID-19 cases with HCQ in the early stages was reported to have a major positive effect on outcomes. Shortly thereafter concerns were raised about its safety[18] and trials were stopped.[19] High doses of the drug can lead to ventricular fibrillation and eventually cardiac arrest,[20][21] which however is well known and documented, so any prescription (initial dose or accumulative) that exceeded the limit caused the death of a patient deliberately, see "Price" further below.

The Lancet [When?] "published a report that HCQ caused 35% more deaths due to adverse effects of the drug in another trial".[19] By late May 2020 "140 academics and clinicians around the world have challenged the veracity of that Lancet article".[22] The Lancet withdrew the paper after within 13 days[19] was discovered to have been published by a shell company. The RECOVERY study in the UK also suggested it was dangerous, but involved very high doses that exceeded its dose for other illnesses.[23]

On 4 July 2020, the WHO discontinued a trial involving hydroxychloroquine and lopinavir/ritonavir for hopitalized patients, citing safety concerns.[24]

On 17 June 2020 the WHO stopped a trial on HCQ concluding that "there was no reduction in mortality’ with the drug", but without publishing any data. On the same day, the UK Recovery trial (funded in part by the Bill & Melinda Gates Foundation) was also stopped, reaching the same conclusion.[19]

In a 23 March 2020 executive order, the Governor of New York, Andrew Cuomo, barred pharmacists from filling prescriptions for chloroquine or hydroxychloroquine as part of clinical trials for COVID-19. In early April 2020 Anthony Fauci opposed the use of either drug as a treatment for severe cases of COVID-19, instead recommending the experimental (and considerably more expensive) remdesivir.[25] By August 2020, with a lot of data showing the effectiveness of hydroxychloroquine, Jim Hoft was calling for Fauci's arrest.[26]

In June 2020 the Association of American Physicians and Surgeons filed a lawsuit against Department of Health and Human Services and the FDA for their “irrational interference” to hydroxychloroquine for treatment of patients.[1]

Senators Ron Johnson, Ted Cruz and Mike Lee sent a letter to FDA Commissioner Stephen Hahn explicitly asking about the agency’s handling of information regarding hydroxychloroquine and its use to treat COVID-19.[27]

Peter McCullough, on the December 13th 2021 Joe Rogan podcast said, that doctors in Africa related to him that militias have been raiding pharmacies and were removing Hydroxychloroquine to destroy it.[34]