Severe acute respiratory syndrome (SARS) was a rare viral respiratory disease, with indistinguishable symptoms to influenza. The handling and presentation of the situation showed several signs with the later handling of the 2009 Swine Flu and 2020 Covid-19 declared pandemics.

At the end of the epidemic in June 2003, the incidence was 8,422 cases with a case fatality rate (CFR) of 11% - as compared to ordinary flu's annual toll of 3-5 million cases each year, resulting in 290,000 to 650,000 deaths.[citation needed] The disease was successfully contained in 2003, but further cases happened after escapes from BSL-4 labs in Asia.

The Chinese researcher, Zhong Nanshan, who “discovered the SARS virus” in 2003, was at the forefront of pronouncements about the “new coronavirus” [[Covid-19] that led to surch drastic lockdowns.

In late 2017, Chinese scientists reportedly traced the virus through the intermediary of civets to cave-dwelling horseshoe bats in Yunnan province.[1]

Only two days after the virus was identified, virologists Christian Drosten and Stephan Günther from the German Bernhard Nocht Institute were the first to develop a diagnostic test that is now used worldwide.[2]

SARS produces flu-like symptoms and may include fever, muscle pain, lethargy, cough, sore throat, and other nonspecific symptoms. SARS is most infectious in severely ill patients, which usually occurs during the second week of the illness. This delayed infectious period meant that quarantine was highly effective; people who were isolated before day five of their illness rarely transmitted the disease to others.[3]

During November 2002 through July 2003, a total of 8,098 people worldwide became sick with severe acute respiratory syndrome [SARS] that was accompanied by either pneumonia or respiratory distress syndrome (probable cases), according to the World Health Organization (WHO). Of these, 774 died. By late July 2003, no new cases were being reported, and WHO declared the global outbreak to be over.[4] 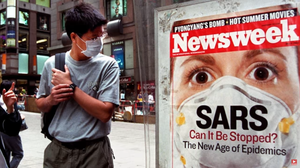 Subsequently, it has escaped from laboratories at least 6 times, once in Singapore, once in Taiwan, and four times from a single laboratory in Beijing.[5]