Home to many noted figures, it represents one of Germany's historic and traditional institutions. As of October 2020, 44 Nobel Prize winners have been affiliated with the University of Göttingen as alumni, faculty members or researchers.

With approximately 9 million media units, the Göttingen State and University Library ranks among the largest libraries in Germany. 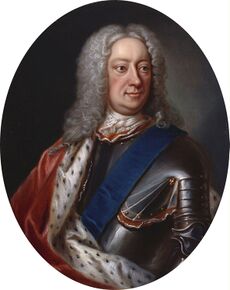 King George II, founder and president of the university

In 1734, King George II of Great Britain, who was also Elector of Hanover, gave his Prime Minister in Hanover, Gerlach Adolph von Münchhausen, the order to establish a university in Göttingen to propagate the ideas and values associated with the European Enlightenment.

Initially, the only new buildings constructed for the opening of the university were a riding hall and a fencing house, while courses were taught in the Paulinerkirche and associated Dominican monastery, or in the homes of professors. No university auditorium was built until well into the 19th century. 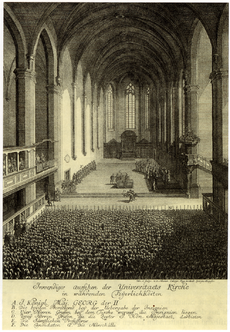 King George II in the Pauliner Church in 1748

Throughout the remainder of the 18th century the University of Göttingen was in the top rank of German universities, with its free spirit and atmosphere of scientific exploration and research. Famously, Georg Christoph Lichtenberg was the first to hold a professorship (1769–99) explicitly dedicated to experimental physics in Germany. By 1812, Göttingen had become an internationally acknowledged modern university with a library of more than 200,000 volumes.

In the first years of the University of Göttingen, it became known especially for its Faculty of Law. In the 18th century Johann Stephan Pütter, a scholar of public law at that time, taught jus publicum for half a century. The subject had attracted students such as Klemens Wenzel Lothar von Metternich, later diplomat and Prime Minister of Austria, and Wilhelm von Humboldt, who later established the University of Berlin. In 1809 Arthur Schopenhauer, the German philosopher best known for his work The World as Will and Representation, became a student at the university, where he studied metaphysics and psychology under Gottlob Ernst Schulze, who advised him to concentrate on Plato and Kant. By the university's centenary in 1837, it was known as the "university of law," as the students enrolled by the faculty of law often made up more than half of the university's students. Göttingen became a Mecca for the study of public law in Germany.

During this time, the University of Göttingen achieved renown for its critical work on history as well. An Enlightenment institution, it produced the Göttingen School of History. 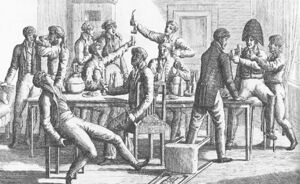 However, political disturbances, in which both professors and students were implicated, lowered the attendance to 860 in 1834. The expulsion in 1837 of the seven professors – the so-called Die Göttinger Sieben (the Germanist Wilhelm Eduard Albrecht (1800–1876), the historian Friedrich Christoph Dahlmann (1785–1860), the orientalist Georg Heinrich August Ewald (1803–1875), the historian Georg Gottfried Gervinus (1805–1875), the physicist Wilhelm Eduard Weber (1804–1891), and the philologist brothers Jakob (1785–1863) and Wilhelm Grimm (1786–1859)) – for protesting against the revocation by Ernest Augustus, King of Hanover, of the liberal constitution of 1833 further reduced the prosperity of the university.

Otto von Bismarck, the main creator and the first Chancellor of the second German Empire, had also studied law in Göttingen in 1833: he lived in a tiny house on the "Wall," now known as "Bismarck Cottage". According to oral tradition, he lived there because his rowdiness had caused him to be banned from living within the city walls.

Turn of the 20th century 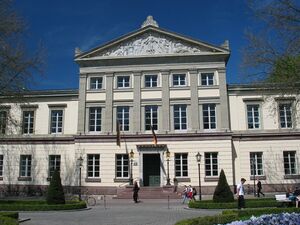 At the end of the 19th and beginning of the 20th century, the University of Göttingen achieved its academic peak. Göttingen maintained a strong focus on natural science, especially mathematics. By 1900, David Hilbert and Felix Klein had attracted mathematicians from around the world to Göttingen, which made it a leading center of mathematics by the turn of the 20th century.[citation needed] Likewise, the Faculty of Theology in conjunction with other orientalists and ancient historians across the university became an international center for the study of religion and antiquity. 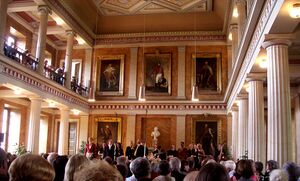 The interior of the university Aula

From 1921 to 1933, the physics theory group was led by Max Born, who, during this time, became one of the three discoverers of the non-relativistic theory of quantum mechanics. He may also have been the first to propose its probabilistic relationship with classical physics. It was one of the main centers of the development of modern physics.

During this time, the German language became an international academic language. A number of dissertations in the UK and the US had German titles. One might be considered having had a complete academic training only when one had studied in Germany. Thus, many American students were proud of having studied in Germany, and the University of Göttingen had profound impacts on the US. A number of American politicians, lawyers, historians and writers received their education from both Harvard and Göttingen. For example, Edward Everett, once Secretary of State and President of Harvard University, stayed in Göttingen for two years of study. George Ticknor spent two years studying classics in Göttingen. Even John Lothrop Motley, a diplomat and historian, had personal friendship with Otto von Bismarck during his two-year-long study in Göttingen. George Bancroft, a politician and historian, received his PhD from the University of Göttingen in 1820.[1] 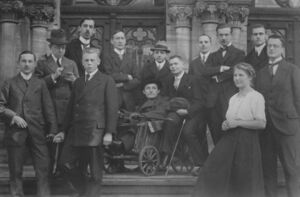 In the 1930s, the university became a focal point for the Nazi crackdown on "Jewish physics", as represented by the work of Albert Einstein. In what was later called the "great purge" of 1933, academics including Max Born, Victor Goldschmidt, James Franck, Eugene Wigner, Leó Szilárd, Edward Teller, Edmund Landau, Emmy Noether, and Richard Courant were expelled or fled. Most of them fled Nazi Germany for places like the United States, Canada, and the United Kingdom. Following the great purge, in 1934 David Hilbert, by then a symbol of German mathematics, was dining with Bernhard Rust, the Nazi minister of education. Rust asked, “How is mathematics at Göttingen, now that it is free from the Jewish influence?” Hilbert replied, “There is no mathematics in Göttingen anymore.”[2]

After World War II, the University of Göttingen was the first university in the western Zones to be re-opened under British control in 1945.