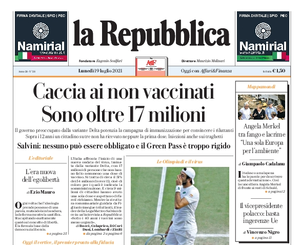 On 17 July 2021, his newspaper had the infamous "Hunt for the non-vaccinated. They are 17 million more" on its front page

Maurizio Molinari is an Italian journalist, as of April 2020 Editor in Chief of the daily la Repubblica, after serving five years as editor in chief of la La Stampa.

A staunch friend of Israel and transatlantic ties, he attended the 2017 Bilderberg conference.

Molinari was born in Rome into a family of Jewish origin[1]. He graduated in 1989 with a bachelor's degree in political science from La Sapienza University in Rome, and, in 1993, with degree in history from the same university. He also studied at the Hebrew University of Jerusalem in Israel and at Manchester College, Oxford in the United Kingdom.

At the same time in 1984 he starts working as a journalist for La Voce Repubblicana, the newspaper of the Italian Republican Party, and achieved professional journalist status in 1989.[2]

Molinari lives between New York City and Turin. He is married since 1994 with Micol Braha. They have four children.

Molinari arrives at La Stampa in 1997, and for over a decade he works as correspondent first from Brussels than from New York City, and since 2014 from Jerusalem and Ramallah, before returning to Turin as editor-in-chief in 2016.

Molinari is a regular guest commentator on Italian TV, including on La7, Rainews24, TgCom and SkyTg24. He has occasionally been a panelist on CNN, CBS and The NewsHour with Jim Lehrer, aired on the Public Broadcasting Service.

According to his colleague Giorgio Dell'Arti, Molinari's points of reference are Judaism, the Italian Republican Party, as well as the "atlantist" vision.[3]

In 2019, he accused the Yellow Vests movement in France ofantisemitism when members of it rejected approaches by "philosopher" Alain Finkielkraut.[4]

Editor in Chief of La Stampa and la Repubblica

On 26 November 2015 Molinari is nominated new Editor in Chief of the Turin daily La Stampa, replacing Mario Calabresi, who was heading to Rome to take the place of Ezio Mauro as Editor in Chief of La Repubblica. The President of EXOR, John Elkann, chooses Molinari over the deputy editor Massimo Gramellini, and flanks him with Massimo Russo (former editor of Wired Italia) as co-director.[5]

In 2015 he was at the center of media controversy when Nicola Perugini, anthropologist at the University of Edinburgh, documented plagiarism in the book The Caliphate of Terror.Some parts was almost identical to the text of the American bestseller by Jay Sekulow, The rise of Isis.[6]

This page imported content from Wikipedia on 31.08.2021.
Wikipedia is not affiliated with Wikispooks.   Original page source here
Retrieved from "https://wikispooks.com/w/index.php?title=Maurizio_Molinari&oldid=223756"
Categories: