On 15 August 2018, President Donald Trump revoked the security clearance of John O. Brennan, the former CIA director under President Barack Obama, in a striking act of retaliation against an outspoken critic. Citing what he called John Brennan’s “erratic” behaviour and “increasingly frenzied commentary,” President Trump dispatched Sarah Huckabee Sanders, his press secretary, to read a statement saying that Brennan had abused his access to the United States’ secrets “to make a series of unfounded and outrageous allegations.”[1]

Barack Obama nominated Brennan as his next director of the CIA on 7 January 2013.

Morris Davis, a former Chief Prosecutor for the Guantanamo Military Commissions compared Brennan to Omar Khadr, who was convicted of "committing murder in violation of the law of war". [2]He suggested that Brennan's role in targeting individuals for CIA missile strikes was no more authorised than the throwing of the grenade Khadr was accused of.

On 27 February 2013, the Senate Intelligence Committee postponed a vote, expected to be taken the next day on the confirmation of Brennan until the following week. On March 5, the Intelligence Committee approved the nomination 12-3. The Senate was set to vote on Brennan's nomination on 6 March 2013. However, Kentucky Senator Rand Paul began a talking Senate filibuster of the vote, citing President Barack Obama and his administration's use of combat drones, stating “No one politician should be allowed to judge the guilt, to charge an individual, to judge the guilt of an individual and to execute an individual. It goes against everything that we fundamentally believe in our country." [3][4] Paul's filibuster continued for 13 hours, after which Brennan was confirmed by a vote of 63-34.

John Brennan told NBC News that his agency will not engage in "enhanced interrogation" practices, including waterboarding — even if ordered to by a future president. "I will not agree to carry out some of these tactics and techniques I've heard bandied about because this institution needs to endure," he stated.[5]

Global Research wrote in 2017 that "The WikiLeaks/Vault 7 dump strengthens the case against John Brennan, the CIA director that Stratfor stated was on a witch hunt against journalists when Rolling Stone reporter Michael Hastings was suspiciously killed after his late model car was almost certainly remote controlled to speed up to near 100 MPH prior to it exploding in June 2013."[6]

An appointment by John O. Brennan 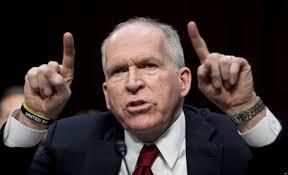