Arms for Libya was a US Deep state operation which Reuters termed "the biggest arms-dealing case in U.S. history"[2] when it was exposed in the early 1980s. When senior deep state operatives were caught shipping tons of weapons and explosives to Libya, Ted Shackley and the rest of the cabal hung Edwin Wilson out to dry; CIA Inspector General signed a mendacious affidavit that his work was unknown to the agency, which the jury believed. After a FOIA request revealed the CIA knew exactly what he was up to, Wilson was released after about 17 years in jail, but his request for compensation was denied. 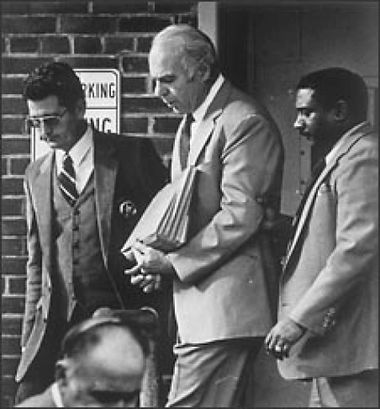 Edwin Wilson, center, is escorted from the U.S. Courthouse in Alexandria, Virginia

Before his 1980 retirement, the CIA Inspector General John H. Waller produced an internal investigation which exonerated Theodore Shackley and his "career-long deputy and sidekick,"[3] Thomas Clines. This was the CIA's official narrative for about 20 years, endorsed by Waller's successor as CIA IG, Charles A. Briggs, who testified in Edwin Wilson's court case.

Having prevented the defense from accessing any contradictory paperwork, the CIA told the jury at Edwin Wilson's trial that he had independently collected almost the entire US stockpile of C-4 (plastic explosive) and arranged to fly it to Libya, without CIA knowledge, following up by sending US troops to train Muammar Gaddafi's military in bomb making, and sold them a bunch of other weapons. This was the subject of an affidavit signed by Charles A. Briggs.

The official story fell apart when an internal document surfaced which proved that the CIA Inspector Generals had been lying and that the "Briggs Affidavit" was a complete fabrication.[4]

Frank Terpil was tried and found guilty in absentia. Douglas Schlachter plead guilty to two charges in a plea deal, after providing testimony directly linking Wilson to "senior Central Intelligence officials" (presumably Ted Shackley and his sidekick Thomas Clines, who in 1981 both admitted that they had kept in touch with Wilson, though they denied knowing anything about the arms deals).[5] Edwin Wilson was depicted as the main culprit.

Edwin Wilson, a CIA officer, brokered a number of weapons deals to Libya. Michael Ruppert wrote that Wilson lived in Libya "for extended periods between 1977 and 1981". The most extraordinary of these deals was in 1977, when a 42,000 pound load of C-4 plastic explosive (an amount which represented almost the entire US domestic supply) was flown out of Houston International Airport to Muammar Gaddafi's Libya, followed by training in bomb making by US Green Berets.[3] Subsequent deals involved handguns and other weapons. A scheme to ship more than a thousand M16 rifles to Gaddafi put the Bureau of Alcohol, Tobacco and Firearms onto Edwin Wilson back in late 1977.[3]

After about 17 years in jail, FOIA requests by Edwin Wilson came across some internal paperwork which proved that those involved in the case knew that the "Briggs Affidavit" was a lie. These sufficed to allow Wilson to successfully appeal his conviction. In October 2003, his conviction on the explosives charge was overturned and Wilson was released from prison on September 14, 2004. He launched a legal claim for compensation against those who perjured evidence against him, and those who knowingly stayed silent on the matter, but they were granted legal immunity and he never received compensation.

Having sold the country plane loads of weapons and trained them in bomb making, the US later depicted Libya as a "terrorist" nation, attempting to mobilise Europe against it, stating at the 1986 Bilderberg that

“Libya is the principal sponsor of terrorism. It finances terrorist acts, it trains terrorist groups, it supplies arms, ammunition, passports and other documents to terrorists, and it uses its embassies, so-called peoples' bureaus, as weapons store-houses and sanctuaries for terrorists. Recently, Libya has been escalating its involvement in terrorism.”
(1986)  [6]

Although it was reported on by commercially-controlled media when it happened, the Arms for Libya was quickly flushed down the memory hole. Its status as a third rail topic is confirmed by the fact that as of July 2019, Wikipedia had no single page for it, the biggest covert arms deal in US (when it happened). Instead, the material takes up about half of Edwin P. Wilson's page. The section is entitled "Arms for Libya controversy". Similarly, it made no mention of Arms for Libya 2.0.

4 July 2016 Robin  Summary of a very revealing event which has slipped down the memory hole.
In the late 1970s, the deep state shipped the entire US stockpile of plastic explosive to Libya, and trained the Libyans how to use it to destroy jumbo jets. When this was exposed, the #3 person in the CIA perjured himself by denying any knowledge. When this deception was exposed, almost 20 years later, no legal action was taken against him.