There have been several leaks revealing different aspects of the COVID-19 deep event.

Around 20,000-25,000 of sets of email addresses and passwords were released online by 21 April 2020.[1] Commercially-controlled media did not report the story widely. "Robert Potter, an independent Australian cybersecurity expert, said the data was real as he could verify some of the email IDs and passwords of WHO."[2]

The leak was initially reported by SITE Intelligence.[3][4] The data was posted to 4chan first.[5]

The affected organizations were NIH, CDC, World Bank, WHO, Gates Foundation, WIV (in that order).

Since no more information related to these e-mail accounts was released, the leak was possibly only intended to show that a breach has taken place and how much time has passed since then.

An internal paper from the German Federal Ministry of the Interior dated March 22, 2020,[10][11] dealt with communication strategies, and how get the population to agree to lockdowns and other measures. The government should use historical comparisons, such as the Spanish flu of 1919 and the Great Depression of 1929 and then say that the new crisis is worse than both together. Most people would see that as a danger. Three specific example scenarios to create fear were mentioned:

In May 2020, an internal paper from the German Federal Ministry of the Interior (BMI) was leaked to the media after it was blocked within the ministry. The statement was written by an senior civil servant in "Department KM 4: Protection of Critical Infrastructure”. The paper concluded: "The state has proven to be one of the largest fake news producers during the Corona crisis" and “The observable effects and effects of COVID-19 do not provide sufficient evidence that - in terms of the health effects on society as a whole - it is more than a false alarm. (...) In all probability we are dealing with a global false alarm that has remained undetected for a long time."[12]

In its response, the Ministry stated that the "paper written by a single employee. The employee was neither involved in the crisis team, nor commissioned or authorized to create or publish such an analysis. It reflects his private opinion, not that of the Federal Ministry of the Interior"[13]

On 26th of July 2021, the cybersecurity researcher Ehden Biber started to publish the contract Pfizer has with Brazil and Albania online, revealing among other things that the corporation had guaranteed full indemnity for all vaccine injuries. 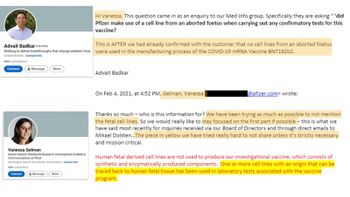 The emails were leaked to Project Veritas

In October 2021, Melissa Strickler, Pfizer’s quality auditor, became a whistleblower with a number of company emails. Commenting on them, she stated "They’re being so deceptive in their emails, it’s almost like it is in the final vaccine. It just made me not trust it.”[14]

In October 2021, the British Medical Journal (BMJ) published a whistleblower who warned that during the testing of Pfizer’s vaccine at several sites in Texas during that autumn, "speed may have come at the cost of data integrity and patient safety".[15]

The whistleblower, Brook Jackson, a regional director who was employed at the research organisation Ventavia Research Group told The BMJ that the company falsified data, unblinded patients, employed inadequately trained vaccinators, and was slow to follow up on adverse events reported in Pfizer’s pivotal phase III trial. Staff who conducted quality control checks were overwhelmed by the volume of problems they were finding. After repeatedly notifying Ventavia of these problems, the regional director, Brook Jackson, emailed a complaint to the US Food and Drug Administration (FDA). Ventavia fired her later the same day - indicating that the FDA told Ventavia about her right away.[16]

Jackson provided The BMJ with dozens of internal company documents, photos, audio recordings, and emails. A few days later Jackson received a call from an FDA inspector to discuss her report but was told that no further information could be provided. She heard nothing further in relation to her report.[16]

In recent months Jackson has reconnected with several former Ventavia employees who all left or were fired from the company. One of them was one of the officials who had taken part in the late September meeting. In a text message sent in June the former official apologised, saying that “everything that you complained about was spot on.”[16]

Two former Ventavia employees spoke to The BMJ anonymously for fear of reprisal and loss of job prospects in the tightly knit research community. Both confirmed broad aspects of Jackson’s complaint. One said that she had worked on over four dozen clinical trials in her career, including many large trials, but had never experienced such a “helter skelter” work environment as with Ventavia on Pfizer’s trial.[16]

Since Jackson reported problems with Ventavia to the FDA in September 2020, Pfizer has hired Ventavia as a research subcontractor on four other vaccine clinical trials (covid-19 vaccine in children and young adults, pregnant women, and a booster dose, as well an RSV vaccine trial.[16]