The Pfizer–BioNTech COVID-19 vaccine tozinameran), sold under the brand name Comirnaty, is an mRNA-based COVID-19 vaccine developed by the German biotechnology company BioNTech in collaboration with Pfizer. As of 30 March 2021, Pfizer and BioNTech aimed to manufacture about 2.5 billion doses in 2021.[1]

On November 18th Pfizer and BioNTech announced they had concluded their phase three trial of BNT. They had demonstrated efficacy of 95% making it possible to give it an Emergency Use Authorization (EUA) from the U.S. Food and Drug Administration. [2]

However, this 95% figure was based upon relative risk reduction. That is the declared percentage difference between the vaccinated group’s 8/18310 chance (0.044%) of developing COVID 19 against a 162/18319 (0.88%) chance of COVID 19 symptoms without the vaccine. It should be noted this only refers to an alleged reduction of COVID 19 symptoms among those who have the virus. The tested endpoints do not demonstrate that the vaccine will either reduce the spread of infection or save lives. It should also be noted that these figures suggest the threat from COVID 19 is vanishingly small.[3][4]

Media outlets, politicians, and public health officials have blared the 95% efficacy. To the casual observer, this would denote 95% reduction in hospitalizations or deaths. When in fact the 95% is calculated, based upon the “Primary Efficacy Endpoints.” In the trial literature these endpoints are described by both companies as non-severe cold/flu symptoms coupled with a positive PCR.

In absolute terms, the effectiveness of the vaccine is (0.88-0.044)% - a risk reduction of 0.84%.[3] In all, this means that according to the preliminary Pfizer-results, someone who takes the Pfizer/BioNtech injection has less than 1% chance of reducing at least one symptom of non-severe “Covid” for a period of 2 months.

In the trials, approximately 5-6 symptoms listed as “side effects” are the same as Covid symptoms. To further bias the trial, Pfizer/BioNtech only started counting “cases” one week after the second dose, and Moderna, 2 weeks after the second dose. Therefore, if these side effects were labelled as “Covid” symptoms instead, even the paltry efficacy of about 1% would be relegated into the negative integers. In others words, the injected group may have been sicker with “Covid” more than the placebo group.[5]

In all, the trials seem to have been a formality for a possibly already existing product using a number of novel technologies with unknown effects.

The actual product is a trade secret, but a Pfizer injection contains maybe 14.400 trillion synthetic spike proteins wrapped in lipid nanoparticles. The nanoparticles might be able to carry 8 mRNA proteins each.[6] The nanoparticles are made up of the widely used pharmaceutical ingredient polyethylene glycol (PEG). This is the first time they are used in an injection.[7]

The lipid shell plays a triple role. First, it protects the genetic material from degradation prior to cellular uptake. Second, the lipid shell, which also contains cholesterol, facilitates cellular uptake through fusion with the lipid membrane of the cell. And finally, it acts as an adjuvant.

A 2019 study showed that small doses of PEG can lead to dramatic pathological immune activation. Animal studies has shown that it is responsible for both anaphylaxis and cardiovascular collapse, and injected PEG activates multiple allergic reactions in humans as well.[8]

In the clinical phase the RNA, was produced with completely different techniques to how it is being mass produced. During the clinical phase they only needed small volumes of vaccine, they were able to use very expensive techniques that delivered highly purified end products. Now that they have entered mass production, that is no longer possible, they have had to switch to lower-cost processes, e.g. using huge quantities of DNA that functions as the substrate to be able to produce the RNA in an in-vitro transcription reaction….[9] 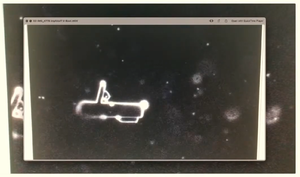 When professors from the pathological institute in Reutlingen (Germany) in September 2021 presented their findings[10] from autopsy reports, of vaccine deaths and unreported contents of vaccines, it included discovery in samples of the Pfizer-vaccine a seemingly "submarine-shaped" object which moved across the microscope.(untranslated video from 2:04:30). These are highly respected and serious researchers. 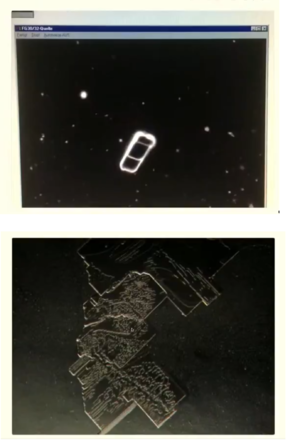 This rectangular object was found in the Biontech sample. The researchers speculated it might be a chip. The bottom image is the same object dried out 3 months later. 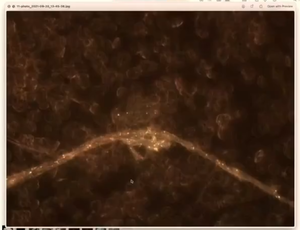 They also discovered the injected material had formed these string structures.

On 21 December 2020, following approval by the UK's MHRA and the US FDA, the European Medicines Agency (EMA) authorised the Pfizer BioNTech Covid-19 vaccine for the EU's nearly 448 million inhabitants. The EMA said the drug had demonstrated an efficacy of 95% and could be used in people aged 16 and over:

"Today's positive news is an important step forward in our fight against this pandemic, which has caused suffering and hardship for so many," said the EMA's executive director, Emer Cooke. "Our thorough evaluation means that we can confidently assure EU citizens of the safety and efficacy of this vaccine and that it meets necessary quality standards. However, our work does not stop here. We will continue to collect and analyse data on the safety and effectiveness of this vaccine to protect people taking the vaccine in the EU."[11]

On 26th of July 2021, the cybersecurity researcher Ehden Biber started to publish the contract Pfizer has with Brazil and Albania online, using the hashtag #PfizerLeak on Twitter.[12][13][14] The exposure was quickly censored by Twitter.

In September 2021, Pfizer announced a COVID pill that is meant to be taken alongside the COVID vaccine. Pfizer is so confident that the pill will be swiftly approved and mandated by governments that it has already started manufacturing at scale at the same time as it started a phase 2/3 study.[17]

Pfizer CEO Albert Bourla instantly cashed in on the announcement, selling 60 percent of his Pfizer stock at $41.99, its highest level in more than a year. [18] The sale had been arranged in advance under a so-called Rule 10b5-1 trading plan, which allows corporate executives to make predetermined stock transactions in compliance with insider trading laws. Bourla adopted the trading plan in August of this year.[19]

Sally Susman, the company’s executive vice president and chief corporate affairs officer, dumped more than 43,000 shares to the tune of about $1.8 million. [20] The sale was allegedly made under a Rule 10b5-1 plan Susman adopted in November 2019.

In December 2020, CEO Bourla said he and his management colleagues wouldn't take his company’s Covid-19 vaccine shot just yet, telling CNBC that he and other executives will not “cut the line.”[21]

In September 2021, the BBC reported on two 11 year old fraternal twins from Virginia who are taking part in the trial.[22]