The Alba Party is a Scottish independence supporting party based in Edinburgh, Scotland, which was founded by award-winning journalist and filmmaker, Laurie Flynn, and publicly launched by former First Minister of Scotland, Alex Salmond, on 26 March 2021.[1][2][3][4]

On 27 March 2021, MP for East Lothian Kenny MacAskill left the SNP to join ALBA.[5] Following the 2021 Scottish Parliament election when ALBA failed to make a breakthrough, Alex Salmond told Sky News he is an "interim leader" and the party will make decisions on its future at a conference next month.

The former First Minister claimed Alba's future is "a very good one indeed", pointing out that it has "5,000 members and we'll have the best part of 50,000 votes across Scotland":

"We've got two Members of Parliament and 20 councillors," he added.[6]

At the Alba Party conference in September 2021, members voted overwhelmingly to replace the monarchy after the Queen’s reign has ended, and in favour of a written constitution in an independent Scottish republic.[7]

Following extensive consultation with good and trusted friends, I registered the Alba Party with the Electoral Commission in January this year.

A retired television producer with two lovely grown up children and two grand-children, I have as an adult always longed to breathe the air of a free and tolerant, democratic and independent Scotland which celebrates human diversity.

It’s also clear to me that we’re very nearly there.

In the Scotland that is busy being born, real equality and real opportunity will be available for all. And the driving purpose of the state will be good governance, a renewed and redoubled Scottish enlightenment and a definitive end to colonial attitudes to the rest of the world, and the unnecessary wars that have always gone with them.

The sole purpose of Alba is to strengthen and deepen the movement for independence through an unstinting generosity of spirit, active and lawful campaigning and the extension of our just and democratic institutions so that they are fit for the 21st century and beyond…

As the poet Kathleen Jamie beautifully puts it, I am one of those:

"Come all ye, the country says.

"You win me who take me most to heart.”

I am delighted to hand over the reins to the former First Minister of Scotland, Alex Salmond. He is the right person to help deliver a #Supermajority for independence.

The Alba Party is led by the former First Minister of Scotland, Alex Salmond. The only party leader to have won an outright majority in the Scottish Parliament.

We have a team of candidates from across society, with wide and various experience.

Candidates of the calibre necessary to help rebuild and recover from the Covid-19 pandemic, and to steer the country through the transition to independence.

Today Alba is raising the flag, our Saltire, and planting it on the hill, flying high in the wind for all to see.

Calling on those who care most about the future of Scotland and its people to rally round; to join the great endeavour, to rebuild our country, to restore our independence.

To work in the service of a better nation for all.

National Independence for Scotland as an immediate necessity, and overwhelming priority, achieved by democratic means through a vote of people resident in Scotland.

The promotion of all Scottish interests, and the building of an economically successful, environmentally responsible and socially-just independent country, through the pursuit of a social democratic programme.

The acceptance by the Scottish people of a written constitution for the newly independent country; defending the rights, liberties and equality of all citizens before the law.

Today I am announcing the public launch of a new political force - the Alba Party. Alba will contest the upcoming Scottish elections as a list only party under my leadership seeking to build a #supermajority for independence in the Scottish parliament

Over the next six weeks we will promote new ideas about taking Scotland forward giving primacy to economic recovery from the pandemic and the achievement of independence for our country.

We expect to field a minimum of four candidates in each regional list and are hoping to elect Alba MSPs from every area of Scotland.

Today I want to introduce you to the party to its aims and to some of our very first candidates. Today we are making an entirely positive statement and also asking people to come forward and give us support

Given the unique circumstances of this election campaign these messages are in video form. However I would like to introduce you to three of our candidates.

Alba was founded by journalist Laurie Flynn who has provided a statement today for distribution.

I have had discussions with Laurie and others from other list parties over the last few weeks but I am sure that it is the concept of ALBA which is the one most soundly based.

The party’s strategic aims are clear and unambiguous - to achieve a successful, socially just and environmentally responsible independent country. The tactics are to stand on the regional list to secure the supermajority for independence in our Parliament.

We intend to contribute policy ideas to assist Scotland’s economic recovery and to help build an independence platform to face the new political realities. At the last election there were nearly one million wasted SNP votes on the regional list. Only four SNP MSPs were elected in that way.

In yesterday’s Survation poll the SNP would elect NO regional seats at all from a million votes on the list. They would all be totally wasted independence votes. If Alba wins regional list seats the wasted votes end. The number of independence supporting MSPs in the Parliament could reach 90 or even more.

The initiative for independence should then be led by the Parliament uniting the parties. Boris Johnson has already said No to the SNP proposals. He will find it much more difficult to say no to a Parliament and a country.

And the independence debate will be recast not as the Tories against the SNP but Boris Johnson against Scotland’s Parliament representing Scotland’s people. Today Alba are hoisting a flag in the wind – planting our saltire on a hill. In the next few weeks we shall see how many will rally to our standard.

Laurie Flynn registered the Alba Party with the Electoral Commission on 8 February 2021.[9]

On 26 March 2021, former First Minister of Scotland Alex Salmond announced at the Alba Party's election launch that he had joined the party and would become the new leader. During the announcement of candidates, it gained its first elected member in Inverclyde Council, councillor Chris McEleny, who was previously an SNP member and was contesting as an SNP candidate for the forthcoming 2021 Scottish Parliament election prior to his defection.[10]

On 27 March 2021, former Cabinet Secretary for Justice Kenny MacAskill announced he was quitting the SNP to join Alex Salmond’s new political party and said he will continue serving as the MP for East Lothian after switching over to the Alba Party, which is aiming to win many of the 56 seats on Holyrood’s regional lists in the 2021 Scottish Parliament election to create a “supermajority” in favour of Scotland's independence from the UK.[11]

The Alba Party announced plans to stand at least four candidates for the list vote in each of the 8 regions in the 2021 Scottish Parliament election. Intended candidates include Alex Salmond as well as former SNP members Chris McEleny, Eva Comrie and Cynthia Guthrie.

The party endorses voting SNP for the constituency vote while voting Alba Party for the list vote, in order to ensure more pro-independence MSPs are elected.[12]

Almost one of two pro-independence votes go to waste because of the Additional Member System (AMS) used in Scottish elections. The #Supermajority strategy creates the opportunity to secure over one million additional votes for independence.[13]

A pro-independence party has agreed to stand down its candidates for the 2021 Scottish Parliament election after the launch of the Alba Party.

Action For Independence (AFI), initially formed under the name Alliance for Independence in summer 2020, confirmed the move in a bid to put “Scotland before Party”. A statement from the group late on Friday 26 March 2021 said:

“The National Executive of Action for Independence (AFI) has agreed to stand down its 42 candidates in the forthcoming election on the 6th May following the launch of Alex Salmond’s ‘list only’ Alba party today.

“AFI is gratified that its concept of Max the Yes and the building of a supermajority of independence supporting MSPs has been taken up by such a highly credible party with such influential leadership.

“The Alba Party is to all intents and purposes ‘AFI 2’ and we note that the ideas, slogans and Max the Yes concept it employs were all spawned by AFI.

“AFI’s members were right in pursuing the Max the Yes concept and they should all be proud of the part they have played in paving the way for an independence supermajority.

“AFI thanks all of our members, candidates and branches for the amazing work they have done in bringing the Max the Yes concept to the fore in Scottish politics and looks forward to an overwhelming pro-independence majority on the 6th of May.

“AFI’s aim has always been to unite the Yes family on the regional lists and we are confident that the Alba Party, with the help of AFI’s members, will succeed in doing that.”[14]

On 27 April 2021, the results of a Panelbase poll suggest the #Supermajority is on: the SNP, Alba and the Greens are on course to win 62% of the seats in the 2021 Scottish Parliament election. This is the third Panelbase poll in succession to show the new pro-independence party on 6%, but in this case the seats projection is even more favourable than before, with Alex Salmond on course to lead an eight-strong group at Holyrood - bigger than the Greens and Liberal Democrats had in the previous parliament. If that's how it turns out, Alba will arguably have succeeded in bringing about the #Supermajority they promised, albeit with the Greens playing a crucial role as well. Pro-indy parties in combination are projected to have 80 seats, which amounts to 62% of the 129 seats in the parliament.[15]

“Across Scotland the message of ALBA is hitting home with voters. Because the SNP are projected to do so well in the constituencies it looks like they have no chance of winning any list seats according to this poll.

“ALBA are the party that have brought the urgency for independence to the fore in this election campaign. This poll shows ALBA winning 8 seats, however if even more SNP voters backed the SNP in their constituency and then transferred to ALBA on the Regional List vote then the #Supermajority could have as many as 90 pro-independence MSPs in the parliament.

“Next week by voting ALBA on the list for independence the people of Scotland can create a political earthquake which will be felt in the heart of Westminster."[16]

#Scotland not #Libya must fund #JusticeForMegrahi appeal to #UKSupremeCourt. Should be a major issue in the #ScottishElections2021. #AlbaParty agree: do the other parties? @Anwar_and_Co @Ali2082009 @PrivateEyeNews @Dabaibahamid[17]

Patrick Haseldine believes the funding the Megrahi appeal to the UK Supreme Court ought to become a major issue in the Scottish parliamentary elections taking place on 6 May 2021. He is certain that ALBA's founder Laurie Flynn will support Scotland's funding of the appeal, and thinks party leader Alex Salmond and MP for East Lothian Kenny MacAskill will do so too. The mainstream media should now interrogate the other political parties on this issue:

"They say a week is a long time in politics. We now have nine days to secure Scottish Government funding for the Megrahi appeal."[18] 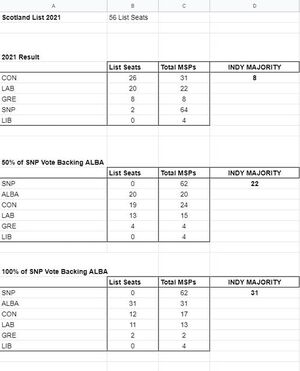 #BothVotesSNP allowed 23 additional Unionists to gain seats on the List (14 Tories and 9 Labour). If the Scottish National Party (SNP) support backed ALBA and #BothVotesYES this would have made Alba Party the second largest party on 31 seats in total and a pro-Indy majority of 31 as opposed to 8.[19]