Aamer Anwar is a Scottish lawyer of Pakistani background who is considered one of Scotland's top lawyers, campaigning for over 25 years for justice and equality. Anwar has been at the forefront of the 'Stop the War Coalition', led the campaign against the 31st G8 summit at Gleneagles in 2005 and has campaigned for closure of Dungavel Detention Centre for failed asylum seekers.[1]

Aamer Anwar is a prolific writer and newspaper columnist whose article "Special relationship with the US - Do we really want it?" appeared in the Scottish Sun on 8 June 2014.[2] Anwar is also active on Twitter where he has recently blocked both Intel Today editor, Ludwig De Braeckeleer, and Emeritus Professor of Lockerbie Studies, Patrick Haseldine, over comments they made concerning his handling of the Megrahi family's appeal against the Lockerbie bombing conviction.[3]

Born in England, Aamer Anwar moved to Scotland in 1986 to study mechanical engineering at the University of Glasgow for a future in the Royal Air Force. He became a student activist and led a campaign for black students at the city's Dental Hospital.

He left engineering to do sociology and politics. He was still a student when, in 1991, he was chased by police officers, after being caught flyposting on Ashton Lane, and beaten up, losing his front teeth being hospitalised. Later, he made legal history by taking the officers responsible to court and receiving £4,500 damages from Strathclyde Police for the assault in which they are alleged to have made the racist comment "this is what happens to black boys with big mouths".

He was the Scottish organiser for the Anti-Nazi League and led a march in 1993 to the London headquarters of the British National Party. He also worked for the Commission for Racial Equality, before deciding, in 1997, to go to law school as a mature student.

Anwar became a solicitor in 2000 and became part of a Glasgow-based partnership, before branching out on his own in 2006 and setting up Aamer Anwar & Co, Solicitors & Notaries. Several nominations for "Criminal Lawyer of the Year" by The Law Awards of Scotland have resulted in Anwar winning in both 2005 and 2006.

Aamer Anwar received a record 13,500 nominations in the short list for the Lloyds TSB Jewel Awards and was awarded the Professional Excellence Award as a "recognition of his outstanding achievements and the huge impact his work has had UK wide."

In 2013 he was a finalist for the Services to Law at the British Muslim Awards sponsored by Accounts Management Services along with Stephen Lawrence Family lawyer Imran Khan. The winner was chief prosecutor Nazir Afzal (CCPS)

In 2014 he was awarded the Scottish Muslim Award—Al Adl Ihsan for Public Services (Adl and Ihsan are Arabic terms for evoking the importance of justice and charity in Islam). He was given the award by Baroness Syeda Warsi on 11 May 2014 who described herself as being a "fan".

He has often represented clients in high profile controversial criminal cases with political or human rights implications. He is best known for his campaigns for justice after the killing of Surjit Singh Chhokar and of Glasgow schoolboy Imran Khan.

Anwar campaigned on behalf of the family of murdered Indian waiter Surjit Singh Chhokar, which became known as the Scottish Stephen Lawrence case and which led to a radical overhaul of the criminal justice system and several inquiries. In the latter case, Anwar led the justice campaign on behalf of the Chhokar family. He also served on the Justice Minister's Stephen Lawrence Steering Group.

In 2012 following the reform of the double jeopardy law he approached the Lord Advocate on behalf of the Chhokar family to request that the case be reopened and reinvestigated. On 2 May 2014, Aamer Anwar and the Chhokar family met with the Lord Advocate who confirmed that following reinvestigation by Police Scotland the Crown was seeking to have the original acquittals of three men set aside in an application to the Appeal Court for a retrial over the murder of Surjit Singh Chhokar.[4]

In 2004 Aamer was the solicitor in the successful Ice Cream Wars appeal, which saw his client 'TC' Campbell cleared after 20 years.

He is noted for his controversial remarks in the aftermath of the 2007 Glasgow International Airport attack, in which he claimed that "That there is no difference between a stealth bomber and a suicide bomber, the effects are still the same", and also that notions of multiculturalism had failed in Scotland as elsewhere in the UK due to widespread rejection of elements of British popular culture, specifically "binge drinking and Big Brother", amongst young people within the Muslim community.[5]

In 2008 he faced allegations of contempt of court in the light of a complaint by the presiding judge in the case, Lord Carloway, because of his disparaging remarks about the jury after the trial and conviction of Mohammed Siddique in the High Court of Justiciary. He was found not guilty of contempt, but Lord Osborne said the statements from the lawyer "embody angry and petulant criticism of the outcome of the trial process and a range of political comments concerning the position of Muslims in our society".

He was the first lawyer in the UK to be put on trial for contempt of court for comments he made on behalf of his client at the end of a trial. In July 2008 he was acquitted, having a legal team led by the late Paul McBride QC, as well as legal submissions in his support from Michael Mansfield QC, Helena Kennedy QC. He was supported by the trade unions and civil liberty organisations, including Liberty, who also backed his case in the High Court. There was widespread condemnation of what was perceived to be an attack on free speech and the rights of a campaigning lawyer.

The late author Iain Banks in support of Anwar in 2007 stated:

"Aamer Anwar is a symbol of freedom. There is a need to speak out when the right to dissent and the right to speak the truths that need to be spoken are under threat. I’d urge anyone who believes in fairness and simple human decency to support him. The Scottish judicial system has enough to be ashamed of after the Lockerbie trial; let there be no more injustice in its name."

He was cleared of any wrongdoing by the Law Society. He was ultimately vindicated following the successful appeal of Mohammed Atif Siddique in February 2010, which led to his release and the quashing of his conviction under Section 58 – Collection of information of the Terrorism Act 2000, which was described as a miscarriage of justice by the appeal court.

In 2008 he was runner-up in the election for Rector of the University of Glasgow, losing the race for the position to Charles Kennedy.[6]

In 2010 he acted as solicitor for Tommy Sheridan in HM Advocate v Sheridan and Sheridan. After Sheridan sacked his advocate he was retained as amicus curiae.

On 31 January 2011 a complaint was made by Anwar, following confirmation from Vodafone that there had been attempts to access his voicemail prior to the start of the Sheridan trial.[7]

In July 2011 Anwar presented a dossier along with Tom Watson MP to Strathclyde Police into alleged criminality at the News of the World, allegations of phone hacking, data breaches and corruption in the Police. This led to full scale police inquiry by Strathclyde Police termed Operation Rubicon and the subsequent arrest of Andrew Coulson and Bob Bird Scottish Editor of News of the World.[8]

In April 2013, it was announced that Anwar would represent National Collective in possible legal action put forward by the representatives of oil company Vitol. Vitol's representatives threatened legal action against National Collective, a political organisation supporting Scottish independence, for being "grossly defamatory" after linking Ian Taylor, their CEO and a major "Better Together" donor, to questionable deals in Iran, Iraq, Syria, and Serbia. The organisation stated that they "will not be bullied or silenced" and that their website is "offline only as a temporary measure for a few days".[9][10]

On 2 October 2012 he gave evidence to the Scottish Parliament's Justice Committee arguing against allowing cameras into criminal trials. 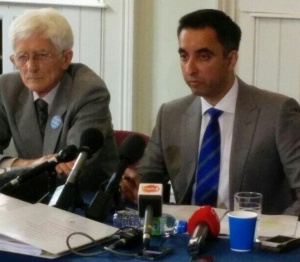 On 5 June 2014, the BBC reported that Aamer Anwar - acting for six of Abdelbaset al-Megrahi's relatives and for 24 British Lockerbie relatives, including John Mosey and Dr Jim Swire - had lodged a new application with the SCCRC for Megrahi's Lockerbie bombing conviction to be reviewed.[11][12][13]

On 22 December 2014, the SCCRC announced that since the current application was actively supported only by the members of the victims’ families, and not by Megrahi's family, the Commission was seeking advice from the High Court in Edinburgh. Aamer Anwar reacted in a press release:

"It was extremely disappointing for the victim’s families to hear of the latest decision by the SCCRC through the media. With respect, we would submit that the Commission are wrong and that we remain instructed by members of the Megrahi family as well as the British relatives. We have been in communication with the Megrahi family, both via intermediaries and directly. Communication is hampered by an extremely dangerous situation in Libya, a situation referred to yesterday by the Lord Advocate, by way of an explanation for lack of any progress in relation to investigations into the Lockerbie atrocity."[14][15]

In July 2015, three Judges at the Appeal Court in Edinburgh ruled that Scots law did not allow relatives of Lockerbie bombing victims to pursue an appeal on Megrahi's behalf.[16]

“Aamer Anwar — the lawyer for Megrahi’s family — is repeating all the old mistakes that brought us this spectacular miscarriage of justice, including a grandiose press release, that is riddled with nonsensical, erroneous, illogical, and counter-productive statements. I expect that the judges will unanimously uphold the guilty verdict. In the end, this appeal will do more harm than good.” Intel Today — Aug. 26 2020

Clearly, the Lockerbie saga is now over as far as Justice is concerned. Let me repeat this. It is over. Full stop.

Obviously, Mr Aamer Anwar and Pr. Robert Black are among those people who never understand…

After miserably losing the third appeal, Mr Anwar said the second ground of appeal — the failure to disclose information to the defence — hinged on a “compatibility issue” arising from a question relating to a breach of human rights.

“This will be the basis for the application to the UK Supreme Court,” Anwar stated.

Commenting on Anwar’s press release, Pr. Black suggested that the case would be brought before the European Court of Human Rights (ECHR) next if necessary.

These clowns never open their mouths without subtracting from the sum of human knowledge.

“Aamer Anwar will have to be far more accurate when the new Lockerbie trial begins. This should be a warning, or else this trial will be just another disaster.”

And instead of listening to a real expert, this complete idiot decided to block me on Twitter. From that moment on, there was no hope for truth. The Lockerbie case was lost.[17]

This page imported content from Wikipedia on 5 June 2014.
Wikipedia is not affiliated with Wikispooks.   Original page source here
Retrieved from "https://wikispooks.com/w/index.php?title=Aamer_Anwar&oldid=209384"
Categories: