In January 2021, the Court of Criminal Appeal in Scotland announced it had upheld the original trial verdict and rejected the Megrahi family’s posthumous appeal against conviction.[1]

Appeal to the Supreme Court

"I have now instructed our legal team to seek leave to appeal directly to the UK Supreme Court which is the final court of appeal for my father's case.

"It is time for a new Libya, but that will never happen until there is justice for those who died in Lockerbie. I regard my father Abdelbaset al-Megrahi as the 271st victim of Lockerbie.

"We now have a new democratic government and we look to them to support our legal team in their pursuit of justice."

"I have no doubt that the new democratic Libyan Government headed by Abdul Hamid al-Dabaiba will support this final appeal for justice on behalf of the al-Megrahi family and help in our efforts to prove the innocence of Libya and its people."[2]

On 25 April 2021, responding to a post on Facebook headed "Document:Justice for Megrahi - is Aamer Anwar capable of getting it?", Ali al-Megrahi wrote:

The first thing is that there is no justice on earth when it comes to justice.

The first point is when my father surrendered himself because he thought that there was a fair trial, and when he gave himself up, he knows that he gave himself up for 6 million Libyans to lift the siege from them and live as free as all people. America accused my father of falsehood. Why when the US President says that my father is a terrorist or a criminal or a murderer before a trial or investigation?

In this regard, how can there be justice when you accuse someone before the verdict of being a murderer?

There is such a thing as suspicion. Suspicion happens at any moment, and this matter is normal, but when you say that he is the bomber before the verdict or before the investigation, then that means that the case was originally planned against Libya.

There is a big lie that will expose Britain, because it knew from the beginning who the real killers were, and they were the Iranians. They fear them because they have power that would harm British security if the accusation turned to Iran.

In international or domestic law, there is no legal right to conceal evidence from an accused person even if it did not benefit the accused. Why are they afraid of the papers being released, ask yourself because they know the truth of the matter and that Libya is not guilty.

In terms of Mr Aamer Anwar, he is a person who fights for the truth and for justice. He is a striving person and a man at a high legal level. The defence team are volunteers. I challenge any lawyer in the world to volunteer for the struggle for truth and justice.

A man of history making. With his global position and that Aamer is walking on the right path. I know everything he does, and he knows every point in the case and knows the right from wrong. You believe in your government, but we believe in God who will help us to win this.

I thank Aamer Anwar. The entire Libyan people are with you Aamer and the al-Megrahi family are the first ones there for you, Aamer Anwar.[3] 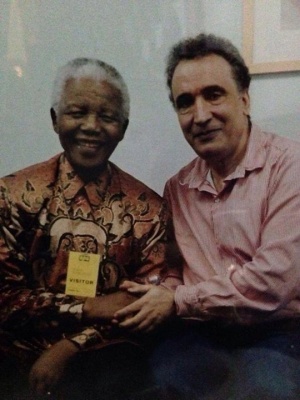 In August 2016, the Lockerbietruth.com website published a letter from Ali al-Megrahi about Nelson Mandela's visit to Barlinnie Jail on 10 June 2002:

For the first time in history a president of a country visited a person that is accused of a crime in prison because he knew and was sure that my dad was not guilty.

He said to him I know you are not guilty. The injustice that is happening to you has happened to me before.

You will always be a symbol for Libya because you are a man who was wrongfully accused. You sacrificed yourself for Libya and for the Libyan people and I'm proud because you hung on and stayed strong.

Because it's hard to take this decision for the country or your life so you did something that is historical and I will never forget it my whole life.

These are the words of Nelson Mandela to my dad Abdelbaset al-Megrahi.[4]